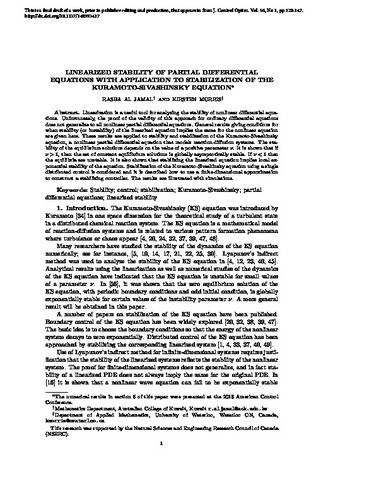 Linearization is a useful tool for analyzing the stability of nonlinear differential equations. Unfortunately, the proof of the validity of this approach for ordinary differential equations does not generalize to all nonlinear partial differential equations. General results giving conditions for when stability (or instability) of the linearized equation implies the same for the nonlinear equation are given here. These results are applied to stability and stabilization of the Kuramoto--Sivashinsky equation, a nonlinear partial differential equation that models reaction-diffusion systems. The stability of the equilibrium solutions depends on the value of a positive parameter $\nu$. It is shown that if $\nu>1$, then the set of constant equilibrium solutions is globally asymptotically stable. If $\nu<1$, then the equilibria are unstable. It is also shown that stabilizing the linearized equation implies local exponential stability of the equation. Stabilization of the Kuramoto--Sivashinsky equation using a single distributed control is considered and it is described how to use a finite-dimensional approximation to construct a stabilizing controller. The results are illustrated with simulations.