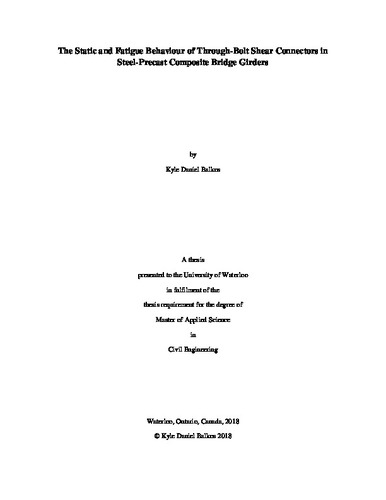 Increasing demand for the rapid and economically efficient construction of bridges has encouraged engineers to employ the use of accelerated bridge construction through modular assembly. The replacement of vehicular bridges in highly populated areas using traditional construction methods typically results in significant social and economic impacts as a consequence of lengthy closures of these bridges during construction. Accelerated bridge construction through modular assembly offers an advantageous alternative, as it can drastically reduce the duration for which the bridge is out of service, therefore minimizing the corresponding impacts. Full-depth, precast concrete decks connected to steel girders using mechanical shear connectors is one form of accelerated bridge construction where the major components can be fabricated off-site. Employing modular bridge components takes advantage of improved quality and efficient construction through prefabrication, resulting in easier and more rapid installation on-site. Currently, welded, headed shear studs are the most common type of shear connector used in composite bridge construction. An attractive alternative to this connection type is the use of slip-critical through-bolt shear connectors as they are expected to offer advantages with regards to their reduced installation and disassembly times, as well as their fatigue performance. Currently, relatively little is known about the true static load-slip and the fatigue behaviour of slip-critical through-bolt shear connectors in composite beams. Therefore, the following research project investigates the static and fatigue performance of these connectors. In order to do this, three large-scale composite beam specimens were fabricated, instrumented, and tested in an experimental program involving both static and fatigue loading. In order to better understand the static load-slip behaviour of this connector type, a mechanistic model was also developed, along with a nonlinear finite element (FE) model of a through-bolt connection. Results of the beam tests were compared with results from a previous study employing a simpler push test configuration, in order to understand the behaviour differences resulting from the choice of test configuration. Comparisons were also made between the experimental results and load-slip predictions made using the developed mechanistic and FE models. The fatigue testing did not result in the failure of any through-bolt shear connectors for the configurations considered in this experimental program. The fatigue performance of the through-bolt shear connectors far exceeded the predicted fatigue life obtained using the current fatigue design provisions for welded, headed shear studs. The static beam test and the push test resulted in similar peak shear loads prior to the onset of failure of the through-bolts. However, the slopes of the two load-slip curves were quite different, with the through-bolt shear connectors behaving in a much less stiff manner when tested in a beam test relative to a push test. Moreover, the slip required to produce a through-bolt failure is seen to be much higher in a beam test. The static load-slip behaviour of a through-bolt push test specimen was predicted using a mechanistic model. Comparison of the load-slip curves generated by the mechanistic model with the available push test results revealed that the mechanistic model is capable of accurately predicting the load-slip behaviour of through-bolt shear connectors. A comparison of the load-slip curves generated by the FE analysis revealed that the FE models are also able to predict the load-slip behaviour of through-bolt shear connectors. The findings in this study suggest that the performance of composite bridges, in terms of fatigue life, could be significantly improved if through-bolts were used in place of traditional headed shear studs. However, further experimental testing is recommended to fully develop this connection concept.