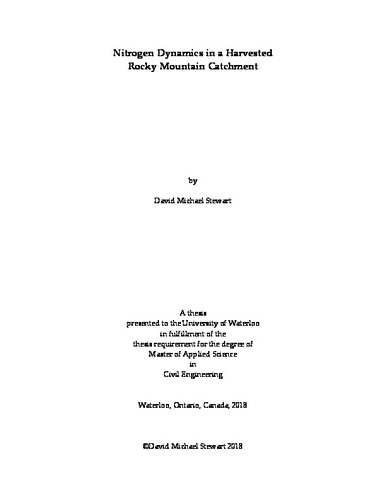 While the impacts of forest harvesting on nitrogen (N) are largely well documented, changes to watershed N following harvesting are difficult to characterize within steep, mountainous terrain creating uncertainty for downstream ecosystem and public health. For drinking water supplies, increases in source water N can reduce disinfection efficiency and increase oxidant demand. In conjunction with increases in other nutrients, changes in source water N concentrations and species can affect the trophic status of drinking water supplies, potentially leading to further treatability challenges including cyanobacterial blooms that have the potential to lead to service disruptions. Thus, an understanding of changes in key nutrients like N is critical for source water protection and management in the drinking water industry, particularly as disturbances occur in key source watersheds. Mountainous terrain can create different hydro-climatic regions that govern watershed export of N after forest harvesting. Physiographic features such as hillslope positioning and aspect can not only create strong spatial variation in, but also be used to categorize radiation, temperature, and nutrient turnover therefore governing post-disturbance catchment exports of N. The broad goal of this research was to explore the role of physiography (hillslope positioning and aspect), on regulating post-harvesting N production and transport into streams in the eastern slopes of the Rocky Mountains in Alberta, Canada. A combined approach employing the measurement of key soil N species (laboratory analysis), N availability (ion exchange membranes), pore water N (suction lysimeters), and streamwater N species (historical data) allowed for a robust insight into how different fractions of N behave both spatially, and temporally. Hillslope positioning (upper vs riparian) and aspect (north- and south-facing) were found to be important factors in N cycling. South-facing riparian zones showed greater potential nitrification, NH4+-N, NO3--N, available NH4+-N, available NO3--N, pH, TC, TN, and C/N ratios, and lower potential ammonification than any other locations investigated suggesting that these sites are more biogeochemically active and may contribute more to streamwater N than north-facing riparian zones. Compared to other types of forest disturbance (i.e. wildfire) that are common in nearby watersheds, clearcut harvesting did not produce a large impact on hillslope soil N availability or watershed scale production of N in 2016 (1st full growing season after harvesting). While a short transient pulse of streamwater NO3-, TDN, and TN was observed during a short series of rainstorms in the 3 to 4 spring months after harvesting, no harvest-associated effects on stream N export dynamics were detectable prior to, or 1.5 years afterwards. These findings support the notion of high potential watershed and ecosystem resistance to harvest impacts on N regimes in this region.