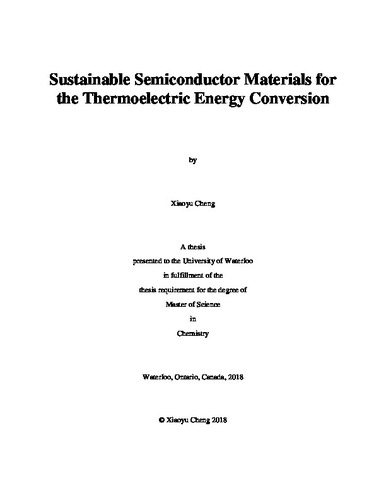 Thermoelectric materials can be employed for converting waste energy into feasible electricity through a temperature gradient by utilizing the Seebeck effect (power generation), and vice versa, as coolers by utilizing the Peltier effect. The most wildly used thermoelectric materials are formed by heavy, often toxic and expensive elements, such as Bi2Te3 and PbTe. Recent research on magnesium silicide stannide based materials had revealed promising performance with light and abundant elements, and thus the potential to reduce the material cost, making it more favorable for industrial and commercial applications. The conversion efficiency for thermoelectric material is evaluated by a unitless figure of merit (ZT), which is proportional to the power factor value over the thermal conductivity. Doping with Bi and alloying with Sn were proved to be efficient in enhancing the performance of magnesium silicide stannide based material with improved power factors. However, the thermal conductivity is still noticeably high. To further improve the performance, one potential approach is by decreasing the thermal conductivity via alloying with Pb. The presence of Pb introduces additional scattering and mass fluctuations into the solid solution matrix, which should reduce the lattice thermal conductivity significantly. In this study, different amounts of Pb were added into the Bi-doped Mg-Si-Sn solid solutions, and the impact of Pb was investigated. Due to the failure of the thermal conductivity apparatus, only the electrical properties were experimentally measured, the electronic thermal conductivity was calculated, and conservative estimations were made on the lattice thermal conductivity. The highest estimated ZT of 1.34 was achieved at around 773 K, with the composition of Mg2Si0.35Sn0.57Pb0.03Bi0.05, which is comparable to the highest literature value for the sample without Pb. That being said, with an expected lower lattice thermal conductivity than our estimation, the ZT for the sample with Pb is most likely underestimated. All samples revealed similar ZT values, and further measurements of the thermal conductivity will be performed to validate the assumption.