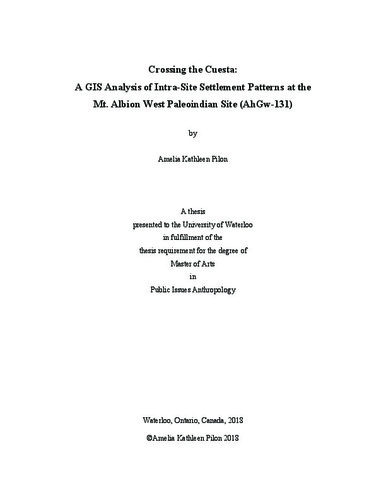 Excavated by Archaeological Services Inc. (ASI) between 1998 and 2004, the Mt. Albion West (AhGw-131) Early Paleoindian site is one of only a handful of Late Pleistocene sites in Ontario. Situated adjacent to the Red Hill valley on the Niagara Escarpment in Hamilton, Ontario, this site produced four discrete artifact concentration areas. While the tools recovered from this site were thoroughly analyzed, comparatively little attention has been given to its settlement patterns. Settlement pattern analysis is especially important in Ontario Paleoindian research given the material constraints presented by hunter-gatherer mobility and environmental factors not conducive to preservation. In this thesis, the four activity areas from Mt. Albion West are analyzed using Geographic Information Systems (GIS) with an eye toward interpreting the site’s function(s) and significance within the broader Early Paleoindian settlement system.