The forest transition and ecological thresholds: resilience, recovery, and predictions 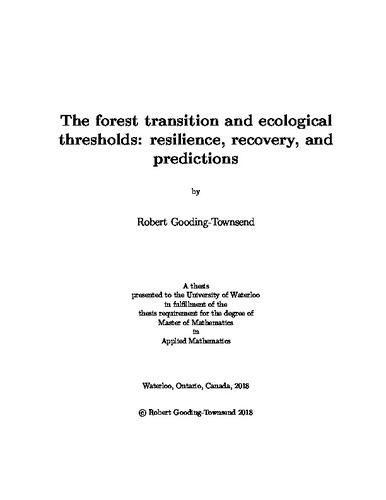 A central topic in modeling land use change is to understand the forest transition from deforestation to net reforestation. Agricultural land use change is the main driver of this phenomenon; classically, agricultural land expands considerably to feed a growing population, and then declines as efficiency gains are realized, marginal farmland is abandoned, and rural populations move to cities. As a result, existing models have focused on the socioeconomic and demographic factors that drive agricultural intensification. However, in doing so, these models often neglect the role of ecological feedback effects and thresholds. These ecological thresholds can cause rapid shifts in ecosystems, such as forest collapse, based on small changes in parameters, and are very difficult to predict. The existence of these thresholds implies that agricultural expansion carries a risk of forest collapse. We aim to use realistic models to assess the risk of collapse in forest cover, dependence on key parameters, and strategies to avoid it. To address the risk of forest collapse, we develop and analyze a differential equation model that incorporates both agricultural intensification and ecological thresholds. We use parameter values from the literature to adapt this model to boreal and tropical forests. We analyze the model with bifurcation diagrams, simulations of key resilience metrics, and fitted time series of real-world data for China, Costa Rica, and Vietnam. Our analysis shows that there is a risk of forest collapse, and that the system is particularly sensitive to agricultural parameters. We find that regardless of the mechanism by which collapse occurs, there is a critical value of 20-25% forest cover. In scenarios of interest (i.e. forest transitions), initial deforestation would result in collapse if left unchecked. We estimate model parameters at multiple points along historical time series, which allows us to infer the risk of collapse and identify historical patterns. This shows that forest transitions can be caused by more varied parameter patterns than classically assumed in the literature; in particular, rates of land conversion and agricultural abandonment rate may remain elevated, instead of declining after intensification. The agricultural abandonment rate is a key advance predictor of collapse at long time horizons, but at the brink of a crisis forest collapse can best be avoided by reducing the forest conversion rate. We argue that ecological threshold effects should be acknowledged in forest transition models not only for ecological accuracy but also to ensure prudent forest management, particularly in the face of emerging risks such as climate change.