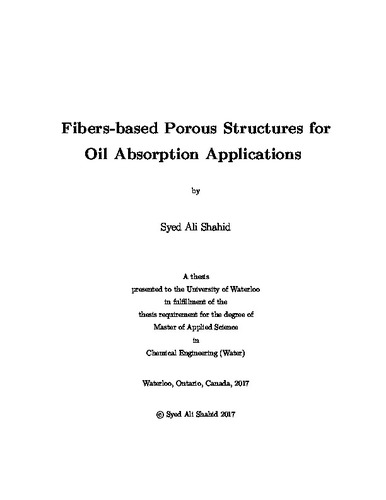 In the age of environmental awareness the persistent problem of oil spills and their frequent occurrences have urged researchers to advance and innovate the methods for oil spill remediation. Besides being a significant economic loss oil spills have devastating impact on the environment that lasts for decades. Current oil spill clean up methods like: skimming, onsite burning and dispersants are often deemed as ineffective and are not eco- and environment friendly. Alternatively porous materials with their excellent innate proprieties are being considered as an enticing avenue for developing clean, inexpensive and an environment friendly solution to the problem of oil spills. This work examines the use of short polymer fibers derived from recycled waste streams which can be enclosed in a suitable containment and used for oil absorption applications. Preventing fiber waste occupying valuable land fill sites and instead using them to solve another environmental problem makes this an environment friendly and a sustainable solution. The recycled short polymer fibers were used to build a porous medium with varying porosity. Methods for characterizing the fiber material were studied and experiments were performed to evaluate the feasibility of these fibers and prove that they indeed are an excellent choice for oil absorption. The hydrophobic and oleophilic character of the recycled fiber material was confirmed by contact angle measurements which also supplemented the study of spontaneous imbibition. The method for water-air capillary pressure curve was also obtained which showed that positive pressure is required to force water into the porous structure which further verified the non-wetting behavior of water on the fiber material. Spontaneous imbibition experiment was performed to characterize the porous media sample to determine the wetting behavior of a range of low bulk densities porous samples with different hydrocarbon oils. The sorption behavior was studied as an immiscible displacement phenomena and the competing mechanisms for oil sorption were discussed while interpreting results. The sorption kinetics of hydrocarbon oils inside the porous media were monitored using a load cell arrangement, thus resulting in the calculation of gravimetric and volumetric absorbency. It was found that certain hydrocarbons reached their peak absorbency at a particular bulk density. The effect of changing bulk density, oil properties and their subsequent effects were evaluated which afforded a fundamental analysis of the sorption mechanism. Wetting phase saturation was used as a criterion for comparing performance of varying bulk densities. Traditional models like the Lucas-Washburn and the Darcy-based model were used to validate the experimental data. Due to considerable differences in the viscosities of the displacing (invader) and the displaced fluid (defender) the invasion front was assumed as compact and a stable sharp front. Under this assumption the fluid flow was modeled as single phase flow and the pore level physics was ignored. These models provide simple phenomenological macroscopic description of flow and with their mathematical simplicity can be conveniently applied on the experimental data. The driving force arising due to the interfacial pressure difference between the wetted and non-wetted regions was found to be an important parameter to derive some useful understanding of the porous structure. Since these models assume porous media to be a bundle of vertically aligned capillary tubes, the capillary pressure as described by the Young-Laplace equation was imposed as the pressure boundary condition at the moving liquid front. The governing equations thus derived gives a relationship between the front height, time and some macroscopic parameters like permeability, effective capillary radius and capillary pressure. It was determined that porosity and wettability changes alone does not correlate with the observed data, hence to evaluate the performance of the sorbents correctly requires further studies on pore connectivity and pore size distributions. This was proposed as future work to analyze the porous structure by obtaining tomographic images and forming a 3-D structure of the real porous media sample. Moving forward the imbibition data could be simulated as two-phase flow directly in these 3-D pore network models. Moreover, accurate relative permeabilities could be used to know the exact front saturation. Using this approach fluid behavior could be predicted much more accurately which would enable to design optimal porous structures for specific applications like sorbent booms for recovery of hydrocarbons from water.