Effects of Land Use and Hydrophysical Drivers on Temporal and Spatial Variability of Phosphorus and Nitrate Export in an Agricultural Subwatershed in Southern Ontario, Canada 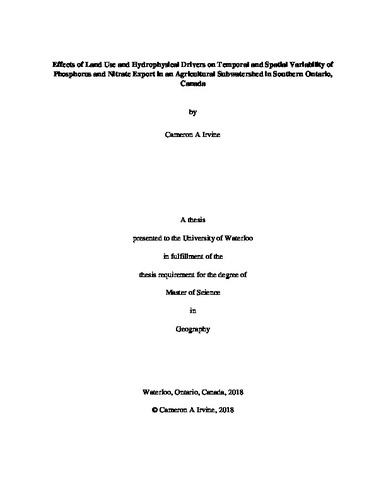 The eutrophication of streams and lakes has been a long recognized problem in North America, particularly in Lake Erie where harmful and nuisance algal blooms have had many deleterious effects on aquatic ecosystems. Non-point source (NPS) pollution from agriculture has been identified as a key contributor of excess nutrients, namely phosphorus (P) and nitrogen (N), in the Great Lakes basin. There remains a need for increased understanding of the processes and drivers of nutrient losses from agricultural watersheds in order to better limit the negative influence of excess nutrients on receiving water bodies. Much of the existing research on agricultural nutrient export has focused on the growing season and there is a need to better characterize the seasonality of nutrient processes, as well as understand the important nutrient transport pathways. The objectives of this research were to identify key source areas (‘hot spots’) and peak periods (‘hot moments’) of nutrient export in an agricultural watershed and to draw inferences between the observed nutrient export and sub-catchment land use and practices. This research also characterizes the role of antecedent moisture conditions (AMC), event size, discharge, and flowpath contributions as potential drivers of the spatial and temporal variability in nutrient loads and concentrations. Streamflow and water chemistry were monitored over a 16-month period at four sites with differing land uses, in the Hopewell Creek watershed in Southern Ontario. The western lobe of the watershed was observed to be the ‘hot spot’ for P loads during all seasons, while temporally, the early spring snowmelt period was identified as the ‘hot moment’ throughout the watershed. The area of the watershed with the highest proportion of tile-drained land did not correspond to the P ‘hot spot’, and was instead an area with high peak flows and livestock operations. Flowpath contributions were shown to be an important driver of total phosphorus (TP) concentrations and nitrate (NO3-) loads through stepwise multiple linear regressions. This research emphasizes the importance of year-round event based monitoring programs for estimating nutrient export and further, that subwatershed scale studies can be used to identify nutrient hot spots in an agriculturally dominated catchment with spatially variable land use practices. Flowpath contributions were found to be important drivers of nutrient dynamics and this suggests that understanding flowpath contributions in agricultural subwaterheds can increase the predictive power for nutrient export models.

Cameron Irvine (2018). Effects of Land Use and Hydrophysical Drivers on Temporal and Spatial Variability of Phosphorus and Nitrate Export in an Agricultural Subwatershed in Southern Ontario, Canada. UWSpace. http://hdl.handle.net/10012/12885