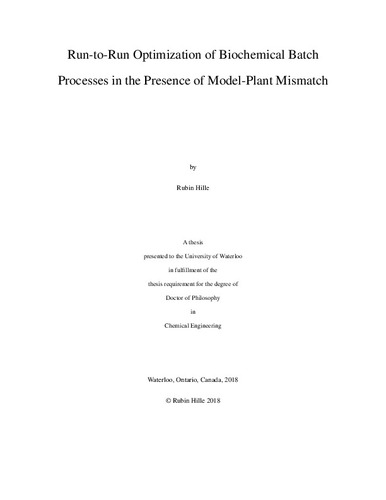 An increased demand for novel pharmaceuticals such as recombinant proteins with therapeutic potential has lead to significant advances in the operation of biotechnological processes. In general, biochemical processes are characterized by nonlinear behavior and a sensitivity to environmental conditions. Furthermore, due to their complex operation, exposure to contamination and the low volume of the obtained product, these processes are generally still frequently operated in batch or fed-batch reactors. The repetitive nature of batch processes motivates the use of previous experimental effort to improve the performance of future batch operations. In this way, a so-called run-to-run optimization can be performed where the measurements of the current batch-run are utilized to determine the input for the next experiment. To conduct this step in a systematic and reliable manner, fundamental process models can be used for prediction and optimization purposes. This way, it is possible to determine the input for the next iteration from the predicted optimum obtained by calibrating a model based on measurements from the current batch-run. Fundamental models are typically derived from the underlying physical phenomena of the process. However, to make these models useful and tractable, it is common to make assumptions and simplifications during the model development. As a result, there often exists mismatch between the model and process under study. In the presence of model-plant mismatch, the set of model parameter estimates, which satisfy an identification objective, may not result in an accurate prediction of the gradients of the cost-function and constraints, which are essential for optimization. To still ensure convergence to the optimum, the method of simultaneous identification and optimization aims at forcing the predicted gradients to match the measured gradients by adapting the model parameters. At the same time, a correction factor is introduced into the model output so that the previously achieved fitting accuracy can be maintained. This results in a set of model parameters that reconcile the objectives of identification and optimization in presence of model-plant mismatch. Although the method provides the potential for dealing with structural error in iterative optimization schemes, there exist several challenges that have to be addressed before it is applicable to more complex systems. For example, when dealing with models containing a large number of parameters, it is unclear which parameters should be selected for calibration and adaptation. Since updating all available parameters is impractical due to estimability problems and over-fitting, there is a motivation for adapting only a subset of parameters. Furthermore, for this method to be more efficient under uncertainty, it is necessary to introduce additional robustness to uncertainty in initial conditions and gradient measurements. Finally, it is essential to develop experimental design criteria that will provide the user with more informative experiments to speed up convergence to the optimum and to calibrate the model with better accuracy. Following the above, this work presents the following new contributions: (i) An algorithmic approach to select a subset of parameters based on the sensitivities of the model outputs as well as of the cost function and constraint gradients. (ii) A run-to-run optimization formulation that is robust to uncertainties in initial batch conditions based on polynomial chaos expansions that are used to quantify the uncertainty and to propagate it onto the optimization cost. (iii) A modified parameter identification objective based on the minimization of the ratio of the sum of squared prediction errors to a parametric sensitivity measure to speed up convergence of the run-to-run procedure. (iv) The use of uncertainty bounds on the predicted trajectories to ensure model accuracy while solving the parameter identification problem described in item (iii) and to determine whether a model update is necessary at any given run. (v) The use of a design of experiments approach within the run-to-run optimization procedure to optimally complement the cost gradient information that is already available from previous batch experiments. The presented methods are shown to be efficient and facilitate the use of complex models for run-to-run optimization of batch processes. Several case studies of cell culture processes are presented to illustrate the improvements in robustness and performance. These case studies involve batch, fed-batch and perfusion operations. A part of this work has been developed in collaboration with an industrial partner whose main line of business is the development of perfusion growth media for mammalian cell culture operations.