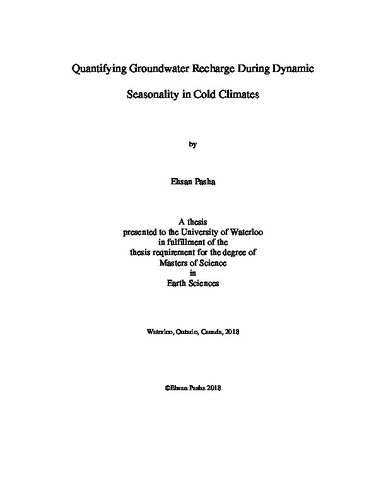 Estimating groundwater recharge in cold climates during periods of dynamic seasonality such as winter melt periods and spring freshets is challenging due to subsurface heterogeneities and the complexity of vadose zone processes under partially frozen conditions. In order to obtain robust recharge estimates, numerical models simulating these complex processes need to be based on reliable parameter estimates and closely calibrated to field observations. This study focuses on quantifying recharge under an ephemeral stream that occasionally develops in the vicinity of a municipal well field during winter melts and spring freshets at a site in southern Ontario. Temperature and moisture content profiles in the vadose zone were obtained during the 2015 spring melt at three different locations (Stations), using a variety of hydrogeological instruments. Temperature thermisters were installed at 15-30 cm spacings from near ground surface to the depth of the water table in order to monitor transient heat migration during periods of rapid recharge. Similarly, transient soil water contend data were collected through the vadose zone at each site with a neutron probe. Water table fluctuations were monitored both directly at the study Stations as well as in a network of monitoring wells located around the Site, and where applicable the water table fluctuation method was used to estimate localized recharge. A transducers was installed at the ground surface near a study station directly in the path of the ephemeral stream to monitor surface water levels. Relevant meteorological data such as air temperature and precipitation was collected at a meteorological station installed in close vicinity of the study site during previous studies at the site. These combined data sets were used to document and quantify groundwater recharge magnitude and duration during the spring melt event and also provided the boundary conditions for the numerical model (Hydrus 1D) and allowed for its calibration and validation. Numerical models were developed at three stations to simulate water flow and heat transport in partially saturated media with transient boundary conditions based on the site-specific soil stratigraphy. Hydraulic and heat parameters were specified based on a combination of site-specific studies and literature values. The cumulative infiltration estimates from the modelling exercise calculated in the Hydrus 1D package through water balance computations, showed a high variability in infiltration estimates at the three stations, demonstrating the extent of spatially variable recharge. Regions of rapid infiltration were observed at the site, as well as steep temperature gradients, which were used to help quantify recharge dynamics. The temperature and moisture content data provided support of surface water, groundwater interaction within event-based time periods predicted by the numerical models. The cumulative infiltration estimates at two of the stations over the brief spring melt period was higher than the average annual infiltration in the region, with one station being almost twice that amount (72 cm over 3 days), indicating that a significant pulse of water can infiltrate under relatively cold conditions in a very short period of time. Based on the subsurface temperature data, the transient nature of the frost layer appears to influence the timing of the recharge event and is therefore critical in accurate estimates of recharge under these cold climate conditions. Furthermore, Christie et al., 2009 found that surface water samples from the ephemeral stream at the study site had high concentrations of microbial indicator species, and therefore the intense recharge phenomena observed at the site has significant implications to groundwater vulnerability. An estimate of the total volume of recharge that can occur in the vicinity of the study site under transient conditions shows that a volume of water equal to the amount pumped per day (1 million Imperial gallons) by one of the downstream municipal wells can infiltrate within the brief spring melt period. The results of this study are important in managing the sustainability of groundwater resources from surface contaminants such as pathogens and for informing source water protection strategies in response to dynamic seasonality.