Elephant-based Volunteer Tourism: An exploration of participant experiences and reflections on captive elephant welfare in Thailand 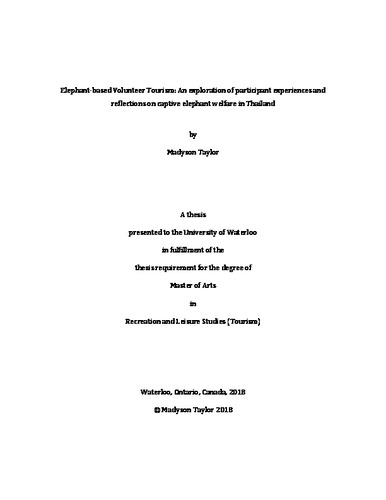 Due to the diverse forms of interaction between humans and animals, particularly in tourism settings, it is no surprise that there has been growing scholarship evaluating its intersection (Cohen, 2009; Fennell, 2012 a,b,c, 2013, 2014, 2015). In recent decades, social science researchers have begun to take up these intersections via tourist experiences encountering wildlife (Markwell, 2015) with a critical subtheme of captive animals as visitor attractions. Informed by eco-feminist philosophy, a case study of elephant-based voluntourism in Thailand is the focus in this scholarship. The purpose of this qualitative research was to understand volunteer tourist perspectives of captive elephant tourism in Thailand. Objectives of this research were to interpret stories and meanings of elephant welfare held by volunteer tourists and assess the potential of volunteer tourism to aid in the improvement of captive elephant welfare. Stories were weaved using tenets of narrative analysis (Glover, 2003; Polkinghorne, 1995) oriented through an eco-feminist lens. Interview data revealed that the process of engagement in elephant welfare and volunteering has resulted in participants feeling a moral responsibility to continue forms of advocacy. The data provides context from which to analyze and think critically about care and welfare and how these pieces may interact to influence the operative nature of tourism enterprises and the wellbeing of captive elephants.