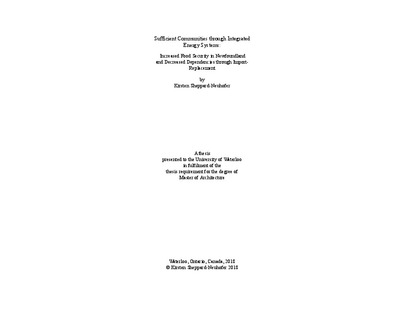 While perceived as equal to other provinces, Newfoundland is Canada’s version of a third world province with the illusion of equality. To use Jane Jacob’s term, Newfoundland has a backwards economy, an economy which does not produce or diversify adequately and instead depends on a vast quantity of imports¹. The province itself acts as an outport, and needs to detach from the exploitation by larger global metropolitan areas. This dependency on external consumers has been a pattern that has led to ongoing economic dependencies, seen in a number of exploitations such as ceding coastlines and fishing rights to foreign Countries, the removal of a customs barrier that protected local farms in 1949, the overfishing of the offshore fishery by European trawlers resulting in a moratorium that disrupted the islands livelihood, and the dependence on food imports. Communities struggle to maintain a quality of life against external economic pressures and exploitation of community resources. As a result, the Island is plagued by youth out-migration and depopulation, and lack of local control over their natural resources. Newfoundland is dependent on the global market for maintaining their quality of life, leaving the province vulnerable. Two struggles are emphasized: the extreme vulnerability and dependence on global imports that result in a lack of human basic needs, and the dangerous exploitation of the Island’s energy resources. There is particular vulnerability to the global market with respect to food resources and produce, as ninety percent of the island’s fruits and vegetables are imported², and the imported produce lacks the quality that Canadians have come to expect. This thesis suggests that the intersection of food security and reducing the exploitation of island resources through a municipality-owned utility creates a framework for more resilient development that is grounded in local conditions. This thesis is founded on a speculative future scenario, where Beothuk Energy’s proposed wind farm in St Georges Bay, Newfoundland is used as the sole energy resource for a year-round regional greenhouse complex that supports the Port-au-Port peninsula through import-replacement, education, and community involvement. The complex aims to increase community self-sufficiency in the region by supplying basic human needs locally, reducing the need for imported produce by establishing a more effective and less vulnerable relationship with the landscape and systems. The design exploration is aligned with proposing an alternate vision to the province’s desolate future in order to spark a conversation among those involved, encourage a daily life that is sufficient and desirable, and facilitate an awareness of the benefit of using local energy for import replacement. The Port-au-Port peninsula is used as a case study in order to provide Island communities with an example of how their own unique resilience can arise. 1 J. Jacobs, Cities and the Wealth of Nations: Principles of Economic Life (New York: Rondom House, 1984), 43. 2 A. James Quinlan, Building agricultural capacity in Newfoundland and Labrador (St Johns, NL, Canada: The Leslie Harris Centre of Regional Policy and Development, Memorial University, 2012), 4.