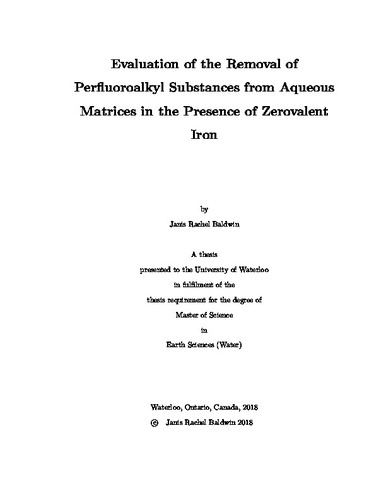 Per- and polyfluoroalkyl substances (PFASs) are a class of persistent organic pollutants present in the environment that pose a threat to human health. PFASs primarily reside within aqueous phases and are present in groundwater environments. Perfluorooctane sulfonic acid (PFOS) and perfluorooctanoic acid (PFOA) are the most predominant PFASs. Remediation techniques focus on oxidation and sorption methods, both of which lack efficacy for all PFASs. There are few studies on reduction treatments such as zerovalent iron (ZVI), which demonstrate potential for both PFOS and PFOA removal and can be applied in subsurface environments. This thesis describes laboratory batch experiments that evaluate PFOS and PFOA removal in the presence of ZVI under a range of physical and geochemical conditions. Mechanisms of removal are explored utilizing PFAS mass balances based on a series of analyses that include aqueous phase fluoride and PFAS short chains, and PFAS extractions from the iron surface. Solid iron phase characterization provides supporting information regarding PFAS interaction with the iron surface. Laboratory batch experiments with PFOS in the presence of granular ZVI were conducted under combinations of initial pH (pH 2.0 and 6.6), temperature (~22°C and 60°C) and ZVI dosage (179 and 1792 mM). PFOS removal was enhanced under low initial pH likely due to a greater abundance of iron oxides compared to higher pH conditions. Higher temperatures also enhanced PFOS removal. PFOS removal by sorption generally increased under low pH and high ZVI dosed conditions, suggesting the abundance of iron oxides and surface area may play an important role. Laboratory batch experiments of PFOS and PFOA in the presence of zerovalent iron nanoparticles (nZVI) were conducted under combinations of initial pH (pH 2.0 and 8.3) and coating (uncoated and palladium-coated). The iron phase likely changed over time, as there was some release of PFOS and PFOA into aqueous solution compared to earlier sampling times. The presence of a palladium coating appeared to minimize the effects of iron corrosion, as PFOS and PFOA were released to a lesser degree at later time points compared to uncoated nZVI. PFOS and PFOA removal is likely dominated by electrostatic interaction, however functional group interaction with the iron surface may also play an important role.

Janis Rachel Baldwin (2018). Evaluation of the Removal of Perfluoroalkyl Substances from Aqueous Matrices in the Presence of Zerovalent Iron. UWSpace. http://hdl.handle.net/10012/12875