The Role of Nitrate in Controlling Iron Release from Sediment during Anoxia in Dimictic, Fresh Water Lakes 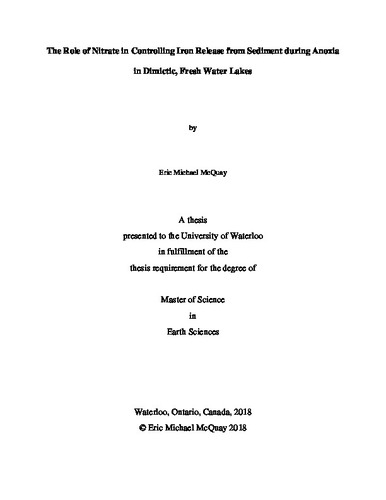 Recent research suggests the availability of reduced iron (Fe) is key in allowing cyanobacteria to outcompete eukaryotic phytoplankton. Cyanobacteria have a greater need for Fe than their eukaryotic competition and are unable to utilize the oxidized form of Fe(III). This means that Fe can be limiting for cyanobacteria growth as the reduced form, Fe(II), is only readily available under anoxic conditions. When the water just above sediment water interface (SWI) becomes anoxic, the redox potential become low enough for Fe(III) to be reduced to Fe(II). As such, it is important to understand the dynamics of four key redox species affect the redox potential at the SWI: O2, nitrate (NO3-), sulfate (SO42-) and Fe. The overall goal of this thesis is to assess the extent that the presence of NO3- at the SWI limits Fe release from lake sediments and the important role this interaction has on cyanobacterial competition. This will be accomplished through four chapters. Chapter 1 provides background information on nutrients, lake stratification, the redox ladder and outlines the current hypothesis for cyanobacterial dominance of phytoplankton blooms. In Chapters 2 the aim was demonstrate that the timing and extent of Fe release from sediment during anoxia can be predicted using five basic redox reactions. This was accomplished by collecting field data at two locations and calculating consumption rates of DO, NO3- and SO42- as well as the release rate of Fe from the sediment and constructing a parsimonious model. Chapter 3 looks to strengthen the assumptions made in chapter 2. Sediment incubations were conducted to determine whether or not the equations used in the model constructed in chapter 2. Finally Chapter 4 summarizes the findings of this research and proposes future work that would expand on the ideas presented here. A model was developed that utilizes simple reduction equations of dissolved O2, NO3-, SO42- and Fe, rates and rate orders of the reduction of these redox species, determined from previous years of sampling, to predict the timing of Fe release from hypolimnetic sediment in stratified, anoxic lakes. Water samples were collected from the hypolimnion of Sturgeon Bay and Deep Bay bi-weekly during the summer of 2014 and 2015 and were analyzed for concentrations of O2, NO3-, SO42- and Fe. It was determined that reduction rates of all key redox species remain consistent between years which means that the only information required to run the model for other years is the initial concentrations of the key redox elements in the late spring/ early summer of the year in question. By using late spring/early summer concentrations of NO3-, O2 and SO42- from discrete depths in the water column of the hypolimnion as initial conditions, it was possible to accurately predict the timing of Fe release after stratification to within 10 days of when Fe accumulation was observed in the field in the same year. Laboratory scale sediment incubations were conducted to observe and ensure that the rate equations for the reduction of the key redox species used in the model are transferable from one system to another even if the specific rates were not. In addition, the potential use of NO3- in changing redox conditions at the SWI of an anoxic system was assessed. It was determined that laboratory incubated sediments show 0th order for the reduction of O2 and Fe and 1st order for the reduction of NO3-. It was also found that while initial NO3- concentration did delay the timing of Fe release, it had no effect on the rate of Fe release from anoxic sediment once NO3- was removed from the system. The first implication of this research is that the release of Fe from hypolimnetic sediments of stratified lakes, that become anoxic, is able to be modeled by a small number of redox equations allowing for affordable, simple monitoring of lakes. The second implication is that, while the release rate of Fe is constant from year to year under anoxic conditions, the concentration of NO3- present at the SWI can affect the timing of Fe release during the stratification period. As a result, the altering of NO3- ¬concentrations of the hypolimnion may be a valid method in reducing the occurrence or duration of cyanobacteria dominated phytoplankton blooms.