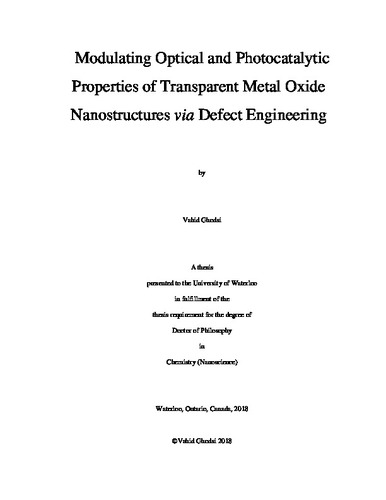 The chemistry of nanostructure has increasingly drawn attention as a compelling branch of semiconductor research. Billions of dollars are annually spent to intentionally incorporate dopants into nanomaterials to enhance their functional properties for specific technological applications. Understanding the role of native defects and their interaction with the extrinsic defects are the key to controlling the behavior of the nanoscale substance. Deliberate incorporation of impurities into wide band gap metal oxides and their structural transformation provide numerous opportunities to manipulate their optical and electrical properties. The first part of this thesis explores the effect of europium dopant on optical and phase transformation in In2O3. The coexistence of multiple luminescent centers (Eu2+ and Eu3+) in corundum and bixbyite-type colloidal In2O3 nanocrystals, achieved by adjusting the nanocrystal synthesis conditions, is demonstrated. The different electronic structure of these polymorphs enables the control of the optical and electrical properties via structural transformation. The luminescent impurities show dramatically different emission properties in the two nanocrystal phases since they are influenced by the interaction with native defects. Concentration of oxygen vacancies in In2O3 nanocrystals are controlled by europium dopant oxidation state and concentration, and the nanocrystal size and structure. The hydrothermal synthesis of ternary gallium tin oxide nanocrystals throughout the full composition range is illustrated in the next part. Their photoluminescence tunability through the visible region is achieved by adjusting Ga:Sn ratio. Substitutional incorporation of Ga3+ in SnO2 enhances the photoluminescence intensity of SnO2 nanocrystals by approximately three orders of magnitude, reaching photoluminescence quantum yield of > 40%. The enhanced quantum yield is attributed to the formation of donor-acceptor pairs. Band gap widening and stronger Coulomb interaction between charged defect sites explain the increase in emission energy. Time-resolved and steady-state photoluminescence spectroscopies reveal that the nature of the dopant ion controls the interaction of extrinsic and native defects. Nanocrystals with optimized scotopic to photopic ratio and high quantum yield (~ 34%) were synthesized by adjusting various reaction conditions. This demonstrates the potential of these nanoparticles as light sources for general lighting applications. Heterogeneous photocatalysis has emerged as an efficient and sustainable method for wastewater treatment and other environmental remediation, and forms the basis for water splitting and solar-to-fuel conversion. Nanocrystalline metal oxides are of particular interest due to their efficiency, stability, and benign nature. The influence of the crystal structure and defects on the photocatalytic activity of these polymorphic materials remains unclear. The third part of the thesis investigates the impact of structure on the photocatalytic activity of Ga2O3 nanocrystals. High photocatalytic activity of metastable cubic-phase γ-Ga2O3 significantly reduces upon thermally-induced transformation to monoclinic β-Ga2O3. Steady-state and time-resolved photoluminescence measurements reveal that the reduction in photocatalytic activity upon annealing originates from a decrease in oxygen vacancy concentration. Long-lived excited states in γ-Ga2O3 nanocrystals leads to a decreased rate of charge recombination and hence, enhanced interfacial charge transfer. The role of OH^•and O_2^(•-) in photocatalytic degradation of organic dyes by Ga2O3 is revealed by using various scavengers. The results of this work illustrate how manipulation of the location and electronic structure of defect sites in nanostructures can effectively trap charge carriers in defect-induced states and stimulate high photocatalytic activity, without decreasing surface-to-volume ratio. Finally, the synthesis of gallium tin oxide ternary (GTO) photocatalyst by coprecipitation method is reported and the role of dopant in altering the electronic structure of the catalysts is investigated. Higher photocatalytic performance of GTO nanocrystals for photodegradation of an organic dye was observed, compared to commercial catalyst, P25. Structural and spectroscopic analyses are performed to show that an increase in the surface area is not the sole reason for the high activity of GTO catalysts. The incorporation of Ga3+ in SnO2 crystal structure widens the band gap absorption, resulting in photoactivity of conduction band electrons. The suppression of charge recombination, high surface area, and suitable band alignment for redox reactions are responsible for the high efficiency of the GTO photocatalysts. Generation of electrons, holes, hydroxyl and superoxide radicals during the degradation process is confirmed by using different scavengers. A thorough understanding of the role of defect chemistry is required to alter the electronic structure of nanoscale transparent metal oxides for specific applications. The results of this work demonstrate how extrinsic defects can induce luminescent centers in nanocrystals, leading to the design of efficient light sources with optimized characteristics. In addition, systematic control of the concentration of intrinsic and extrinsic defects enables manipulation of charge recombination kinetics for environmental remediation purposes. This work targets a deeper understanding of the concept of rational modification of electronic structure of nanomaterials to pave the way for the architecture of diverse multifunctional materials.