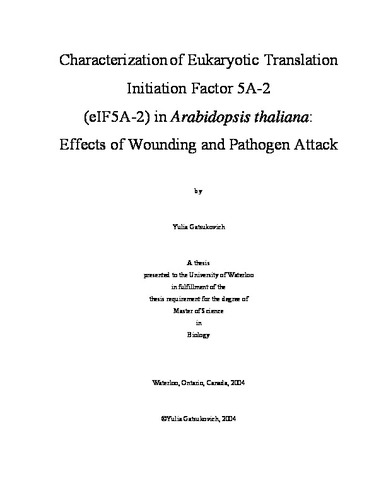 Plants respond to wounding and pathogen ingress by synthesizing defence proteins that facilitate wound healing, cell death or provide protection against further pathogen attack. The accumulation of these proteins is mainly due to rapid transcriptional activation of corresponding genes, though preliminary evidence implies that translational control may also have a role in the stress response. This study focuses on the function of <i>Arabidopsis thaliana</i> eukaryotic translation initiation factor 5A (eIF5A) in mechanical wounding and during infection with the phytopathogen <i>Pseudomonas syringae</i>. Recent evidence suggests that eIF5A acts as a nucleo-cytoplasmic shuttling protein that facilitates mRNA translation through selective transport from the nucleus. Three isoforms of eIF5A have been identified and isolated in <i>Arabidopsis thaliana</i>, suggesting that each distinct isoform may be involved in transport of different subsets of mRNA required for a specific physiological event. The analysis in this study revealed that the eIF5A-2 isoform appears to be involved in the signal transduction pathways that result in cell death following virulent infection, systemic acquired resistance and wounding in <i>Arabidopsis thaliana</i>. Transgenic plants with reduced expression of eIF5A-2 were developed using antisense T-DNA insertion. These lines have shown marked resistance to <i>Pseudomonas syringae</i> pv <i>tomato</i> DC3000, exhibiting up to 99% decrease of bacteria <i>in planta</i> and cell death associated with disease. The capacity to effectively limit growth of various pathogens is important for the design of strategies to improve disease resistance in crops. Development of disease-resistant lines allows efficient crop production with reduced reliance on environmentally undesirable toxic agrichemicals.