StyleCounsel: Seeing the (Random) Forest for the Trees in Adversarial Code Stylometry 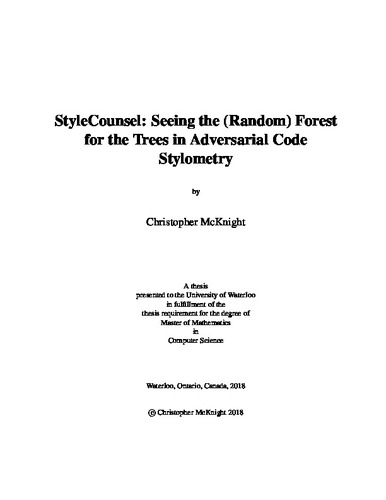 Authorship attribution has piqued the interest of scholars for centuries, but had historically remained a matter of subjective opinion, based upon examination of handwriting and the physical document. Midway through the 20th Century, a technique known as stylometry was developed, in which the content of a document is analyzed to extract the author's grammar use, preferred vocabulary, and other elements of compositional style. In parallel to this, programmers, and particularly those involved in education, were writing and testing systems designed to automate the analysis of good coding style and best practice, in order to assist with grading assignments. In the aftermath of the Morris Worm incident in 1988, researchers began to consider whether this automated analysis of program style could be combined with stylometry techniques and applied to source code, to identify the author of a program. The results of recent experiments have suggested this code stylometry can successfully identify the author of short programs from among hundreds of candidates with up to 98\% precision. This potential ability to discern the programmer of a sample of code from a large group of possible authors could have concerning consequences for the open-source community at large, particularly those contributors that may wish to remain anonymous. Recent international events have suggested the developers of certain anti-censorship and anti-surveillance tools are being targeted by their governments and forced to delete their repositories or face prosecution. In light of this threat to the freedom and privacy of individual programmers around the world, and due to a dearth of published research into practical code stylometry at scale and its feasibility, we carried out a number of investigations looking into the difficulties of applying this technique in the real world, and how one might effect a robust defence against it. To this end, we devised a system to aid programmers in obfuscating their inherent style and imitating another, overt, author's style in order to protect their anonymity from this forensic technique. Our system utilizes the implicit rules encoded in the decision points of a random forest ensemble in order to derive a set of recommendations to present to the user detailing how to achieve this obfuscation and mimicry attack. In order to best test this system, and simultaneously assess the difficulties of performing practical stylometry at scale, we also gathered a large corpus of real open-source software and devised our own feature set including both novel attributes and those inspired or borrowed from other sources. Our results indicate that attempting a mass analysis of publicly available source code is fraught with difficulties in ensuring the integrity of the data. Furthermore, we found ours and most other published feature sets do not sufficiently capture an author's style independently of the content to be very effective at scale, although its accuracy is significantly greater than a random guess. Evaluations of our tool indicate it can successfully extract a set of changes that would result in a misclassification as another user if implemented. More importantly, this extraction was independent of the specifics of the feature set, and therefore would still work even with a more accurate model of style. We ran a limited user study to assess the usability of the tool, and found overall it was beneficial to our participants, and could be even more beneficial if the valuable feedback we received were implemented in future work.