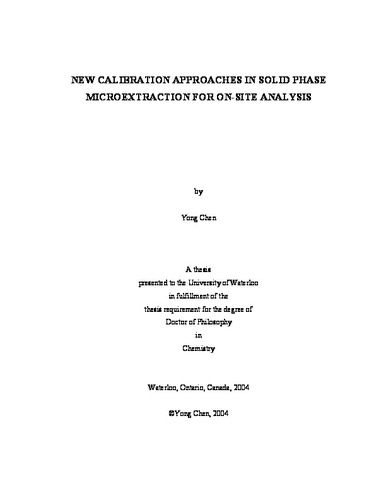 Calibration methods for quantitative on-site sampling using solid phase microextraction (SPME) were developed based on diffusion mass transfer theory. This was investigated using adsorptive polydimethylsiloxane/divinylbenzene (PDMS/DVB) and Carboxen/polydimethylsiloxane (CAR/PDMS) SPME fiber coatings with volatile aromatic hydrocarbons (BTEX: benzene, toluene, ethylbenzene, and o-xylene) as test analytes. Parameters that affected the extraction process (sampling time, analyte concentration, water velocity, and temperature) were investigated. Very short sampling times (10-300 s) and sorbents with a strong affinity and large capacity were used to ensure a 'zero sink' effect calibrate process. It was found that mass uptake of analyte changed linearly with concentration. Increase of water velocity increased mass uptake, though the increase is not linear. Temperature did not affect mass uptake significantly under typical field sampling conditions. To further describe rapid SPME analysis of aqueous samples, a new model translated from heat transfer to a circular cylinder in cross flow was used. An empirical correlation to this model was used to predict the mass transfer coefficient. Findings indicated that the predicted mass uptake compared well with experimental mass uptake. The new model also predicted rapid air sampling accurately. To further integrate the sampling and analysis processes, especially for on-site or <i>in-vivo</i> investigations where the composition of the sample matrix is very complicated and/or agitation of the sample matrix is variable or unknown, a new approach for calibration was developed. This involved the loading internal standards onto the extraction fiber prior to the extraction step. During sampling, the standard partially desorbs into the sample matrix and the rate at which this process occurs, was for calibration. The kinetics of the absorption/desorption was investigated, and the isotropy of the two processes was demonstrated, thus validating this approach for calibration. A modified SPME device was used as a passive sampler to determine the time-weighted average (TWA) concentration of volatile organic compounds (VOCs) in air. The sampler collects the VOCs by the mechanism of molecular diffusion and sorption on to a coated fiber as collection medium. This process was shown to be described by Fick's first law of diffusion, whereby the amount of analyte accumulated over time enable measurement of the TWA concentration to which the sampler was exposed. TWA passive sampling with a SPME device was shown to be almost independent of face velocity, and to be more tolerant of high and low analyte concentrations and long and short sampling times, because of the ease with which the diffusional path length could be changed. Environmental conditions (temperature, pressure, relative humidity, and ozone) had little or no effect on sampling rate. When the SPME device was tested in the field and the results compared with those from National Institute of Occupational Health and Safety (NIOSH) method 1501 good agreement was obtained. To facilitate the use of SPME for field sampling, a new field sampler was designed and tested. The sampler was versatile and user-friendly. The SPME fiber can be positioned precisely inside the needle for TWA sampling, or exposed completely outside the needle for rapid sampling. The needle is protected within a shield at all times hereby eliminating the risk of operator injury and fiber damage. A replaceable Teflon cap is used to seal the needle to preserve sample integrity. Factors that affect the preservation of sample integrity (sorbent efficiency, temperature, and sealing materials) were studied. The use of a highly efficient sorbent is recommended as the first choice for the preservation of sample integrity. Teflon was a good material for sealing the fiber needle, had little memory effect, and could be used repeatedly. To address adsorption of high boiling point compounds on fiber needles, several kinds of deactivated needles were evaluated. RSC-2 blue fiber needles were the more effective. A preliminary field sampling investigation demonstrated the validity of the new SPME device for field applications.