Control of Light-Matter Interactions in Classical and Quantum Optics 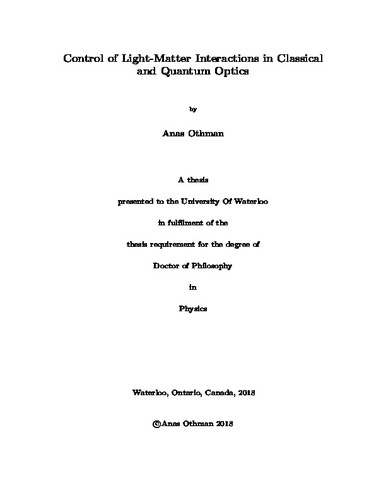 In this thesis, we examined a series of techniques for controlling the interaction of light with matter that could be employed to optimize or to control physical phenomena in various potential applications. Some of these schemes are described with classical electrodynamic theory while others require a semi-classical or full quantum framework. In Ch.(2), we study numerically two implementations of stretchable photonic crystals (SPCs) embedded in elastic polymers. Our analysis, which classifies the bandgaps in terms of two simply determined parameters, indicates that such structures exhibit bandgaps that can be readily adjusted by straining the polymer. In Ch.(3), we considered a five-level atomic system in a dense gas interacting with two low-intensity fields. By examining the influence of different parameters on the refraction index we found that by adjusting the ratio of the two magnetic amplitudes associated with the fields the effects of atomic coherence can be simply controlled. As well, a negative index of refraction can be achieved and controlled over a wide wavelength range with minimal absorption. In Ch.(4), we theoretically investigated the double Lambda scheme inside a Fabry-Perot cavity. By introducing a weak probe beam and two strong driving fields and employing an incoherent pumping mechanism we found that when the intensity of the two driving fields are equal, a single giant white band was generated. However, when they are not equal, three white bands can be present in one cavity. This procedure can also be employed to displace the center frequency of the white band. In Ch.(5), we studied the interaction of a N-type four-level atom with a single field in the presence of an intensity-dependent coupling in a nonlinear Kerr medium. The exact analytic solution is obtained in the case that the atom and electromagnetic field are initially in a higher excited state and a coherent state, respectively. It is then demonstrated that nonclassical properties such as the degree of entanglement stabilization, Kerr medium nonclassical control, and squeezed light can be more efficiently realized and controlled within this four-level framework than in many competing procedures. Finally, in Ch.(6), we theoretically studied the superposition of two nearly identical coherent states. This ``near coherent'' state exhibits numerous nonclassical properties such as sub-Poissonian statistics, squeezing for certain relative phases of the superposition and a partially negative Wigner function.