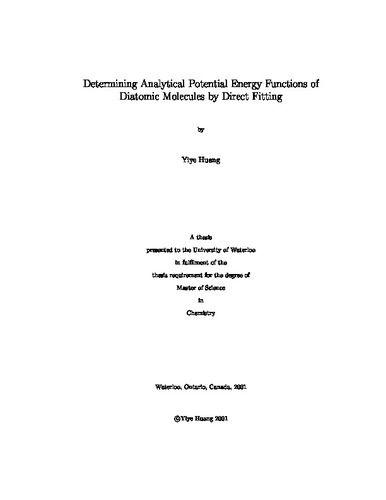 The fully quantum mechanical 'direct-potential-fit' (DPF) method has become increasingly widely used in the reduction of diatomic spectra. The central problem of this method is the representation of the potential energy and Born-Oppenheimer breakdown (BOB) correction functions. There are a number of problems associated with the existing method and potential forms. This thesis delineates these problems and finds solutions to some of them. In particular, it is shown that use of a different expansion variable and a new treatment of some of the expansions resolves most of the problems. These techniques have been successfully tested on the ground electronic states of the coinage metal hydrides and the Rb2 molecule. To address the problem of representing 'barrier' potential curves, a flexible new functional form, the 'double-exponential long-range' (DELR) potential function, is introduced and applied to the B barrier state of Li2. In addition, the Lambda-doubling level splitting which occurs for singlet Pi electronic states has been taken into account by extending the effective Schrodinger equation. The computer program DSPotFit developed in our laboratory for performing DPF analyses has been extended to incorporate the ability to fit the analytical potential energy functions to tunneling predissociation line widths for quasibound levels. Finally, an attempt is made to investigate whether there exists a hump in the ground state rotationless potential curve of beryllium hydride.