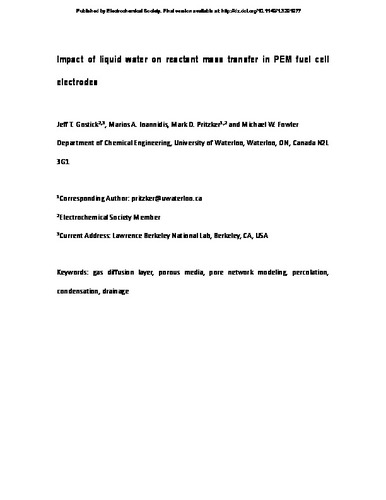 The breakthrough conditions (capillary pressure and liquid water saturation) in a fibrous gas diffusion medium (GDM) used in polymer electrolyte membrane (PEM) fuel cell electrodes have been studied experimentally by two independent techniques and numerically by pore network modeling. Experiments show that treatment of the GDMs with a hydrophobic polymer coating reduces the water saturation at a breakthrough by 50%. Invasion percolation modeling is employed to simulate the breakthrough process and to determine mass-transfer rates through the partially saturated network. This model shows that the water saturation at breakthrough is drastically reduced when a microporous layer (MPL) is incorporated into the GDM, agreeing with experiments. However, the simulations yield limiting currents significantly higher than those observed in practice whether or not an MPL is present. Further calculations to include the contribution of condensation to water saturation within the GDM also result in unrealistically high limiting currents and suggest that mass-transfer resistance in the catalyst layer that is not included in the model plays an important role. If condensation is the principal mode for water accumulation within the GDM, simulations show that the MPL has only a small impact on liquid water distribution and does not improve performance, contrary to expectation.