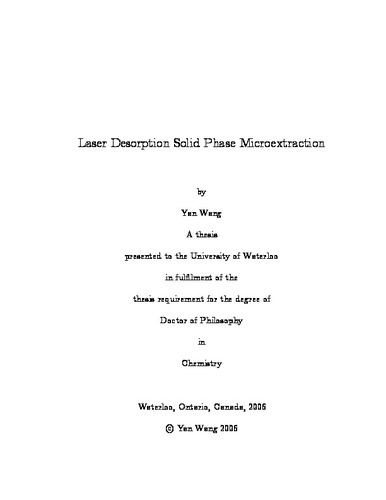 The use of laser desorption as a sample introduction method for solid phase microextraction (SPME) has been investigated in this research project. Three different types of analytical instruments, mass spectrometry (MS), ion mobility spectrometry (IMS) and gas chromatography (GC) were employed as detectors. The coupling of laser desorption SPME to these three instruments was constructed and described in here. <br /><br /> Solid phase microextraction/surface enhanced laser desorption ionization fibers (SPME/SELDI) were developed and have been coupled to two IMS devices. SPME/SELDI combines sampling, sample preparation and sample introduction with the ionization and desorption of the analytes. Other than being the extraction phase for the SPME fiber, the electro-conductive polymer coatings can facilitate the ionization process without the involvement of a matrix assisted laser desorption/ionization (MALDI) matrix. The performance of the SPME coatings and the experimental parameters for laser desorption SPME were investigated with the SPME/SELDI IMS devices. The new SPME/SELDI-IMS 400B device has a faster data acquisition system and a more powerful data analysis program. The optimum laser operation parameters were 250 <em>&mu;J</em> laser energy and 20 <em>Hz</em> repetition rate. Three new SPME coatings, polypyrrole (PPY), polythiophene (PTH) and polyaniline (PAN) were developed and evaluated by an IMS and a GC. The PPY coating was found to have the best performance and was used in most of the experiments. The characteristics of the PPY and the PTH SPME/SELDI fiber were then assessed with both IMS and MS. Good linearity could be observed between the fiber surface area and the signal intensity, and between the concentration and the signal intensities. <br /><br /> The ionization mechanism of poly(ethylene glycol) 400 (PEG) was studied with the SPME/SELDI-IMS 400B device. It was found that the potassiated ions and sodiated ions were both present in the ion mobility spectra. The results obtained with quadrupole time-of-flight (QTOF) MS confirmed the presence of both potassiated and sodiated ions. This result suggested that cationization is the main ionization process when polymers are directly ionized from the PPY coated silica surface. Four PEGs with different average molecular weights and poly(propylene glycol) 400 were also tested with this SPME/SELDI device. The differences between the ion mobility spectra of these polymers could be used for the fast identification of synthetic polymers. <br /><br /> The SPME/SELDI fibers were then coupled to QTOF MS and hybrid quadrupole linear ion trap (QqLIT) MS, respectively. Improved sensitivity could be achieved with QqLIT MS, as the modified AP MALDI source facilitated the ion transmission. The application of method for analysis of urine sample and the bovine serum albumin (BSA) digest were demonstrated with both PPY and PTH fibers. The LOD for leucine enkephalin in urine was determined to be 40 <em>fmol &mu;L<sup>-1</sup></em> with PTH coated fiber; and the LOD for the BSA digest was 2 <em>fmol &mu;L<sup>-1</sup></em> obtained with both PTH and PPY fibers. <br /><br /> A new multiplexed SPME/AP MALDI plate was designed and evaluated on the same QqLIT MS to improve the throughput, and the performance of this technique. The experimental parameters were optimized to obtain a significant improvement in performance. The incorporation of diluted matrix to the extraction solution improved the absolute signal and S/N ratio by 104X and 32X, respectively. The incorporation of reflection geometry for the laser illumination improved the S/N ratio by more than two orders of magnitude. The fully optimized high throughput SPME/AP MALDI configuration generated detection limit improvements on the order of 1000-7500X those achieved prior to these modifications. This system presents a possible alternative for qualitative proteomics and drug screening. <br /><br /> Laser desorption SPME as a sample introduction method for the fast analysis of non-volatile synthetic polymers was also demonstrated here. The coupling of laser desorption SPME to GC/FID and GC/MS was performed, and the advantage of laser desorption over traditional thermal desorption was demonstrated in this research. Laser desorption PEG 400 was observed more effcient than thermal desorption. Good separation was obtained even with a 1-m or 2-m column. These results demonstrate the potential of laser desorption SPME as a sample introduction method for the fast GC analysis of non-volatile compounds such as synthetic polymers.