The Intrinsic Agent: Working with Light 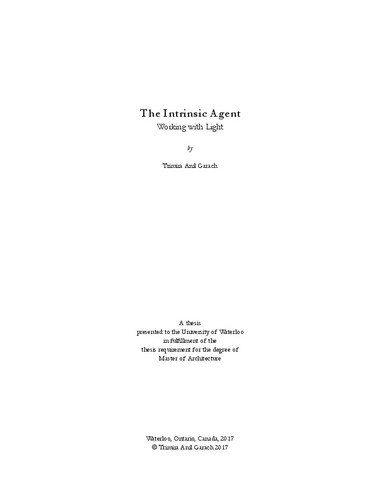 Architecture’s intrinsic natural agent, light, is an elusive and mysterious figure in the process of architectural design. The very phenomenon that reveals to us the contents, materials, and proportions of a space is frequently a passive, incidental occupant. Its potential to affect our perception of architecture and architectural space is clear in religious spaces, where it plays the role of spiritual metaphor, and in artistic installation work, where it is often exposed as a fascinating physical phenomenon. These works have a greater capacity to reveal light’s potential because they utilise it as a primary conceptual tool or catalyst. However, to position light as a necessary overarching conceptual driver of all architectural work because of its pervasiveness is an unreasonable proposition. Instead, The Intrinsic Agent advocates for a greater engagement with light throughout the architectural design process for its communicative power, its ability to reinforce and reveal various larger project concepts and tectonic strategies. The Intrinsic Agent documents the process of finding a methodology of involving light in architectural design. It begins by analysing the positions and tools offered by architectural lighting design and phenomenology and testing the diagrammatic case study, a traditional pedagogical tool, for its effectiveness in revealing an evolvable light strategy. Parametric and computational tools, commonly used to evaluate light, are then introduced as an alternative means by which to physically capture ambient light information and acknowledge its presence. Finding these two avenues lacking as generative methods, knowledge from the fields of architectural lighting design, phenomenology, and optics (the physics of light) is combined and presented in the form of a methodological reference. The reference offers architects and students a loosely structured method of designing with light using three main elements: a system strategy, archetypes of light effect, and optic devices and their parameters. The reference can be used to analyse projects and generate systems of involving light in design using common terms, providing a foundation for discourse and development in this area. For clarity, the reference is then used to study and identify the system strategy of a built project which is then expanded upon and applied in the proposed design of an addition to the building.