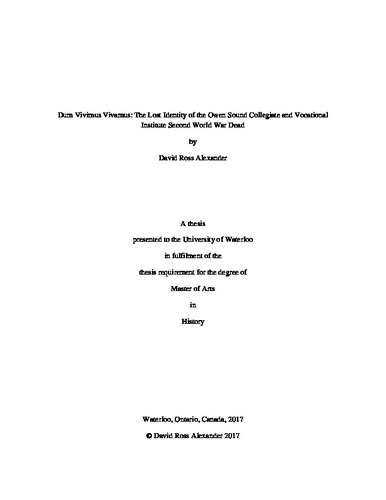 This thesis examines the adolescent and wartime experiences of the Owen Sound Collegiate and Vocational Institute Second World War dead and how they were commemorated after the war. The memorial plaques on the walls of the Owen Sound Collegiate and Vocational Institute (OSCVI) may have borne close resemblance but the experience of those whose names appeared on the walls was very different. By relying upon the traditional methods of remembrance the diverse experiences of youth and war had been obscured for the OSCVI Second World War dead. The early analysis of this study reviews how Canada’s and the OSCVI’s dead war were interred and memorialized across the globe by the Commonwealth War Graves Commission. At the same time efforts were being made to find a meaningful way to commemorate them at home. The decision makers would rely upon the same language, rituals and forms used to remember its First World War dead. But this generation had come of age during the 1920s and the Great Depression in which their adolescent experience especially during their high school years was much different than that of their mother’s and father’s. Soon after war broke out, large numbers of these ex-students enlisted for military service. Not only were they drawn to the army but also to Canada’s burgeoning navy and air force. After all, Canada’s famed Great War flying ace, Billy Bishop, also hailed from Owen Sound. They fought and died in a much more technologically advanced and globalized war than the previous generation of Canadians did. Most died in the air war being waged in European and the Mediterranean Theatres of War while others lost their lives when the First Canadian Army became actively engaged in the ground war. Some were lost at sea during the Battle of the Atlantic while a few succumbed to frivolous accidents after peace had been achieved in Europe. The identity the OSCVI Second World War dead had forged through their youth and war experiences was lost in their commemoration.