Electrostatics of the Binding and Bending of Lipid Bilayers: Charge-Correlation Forces and Preferred Curvatures 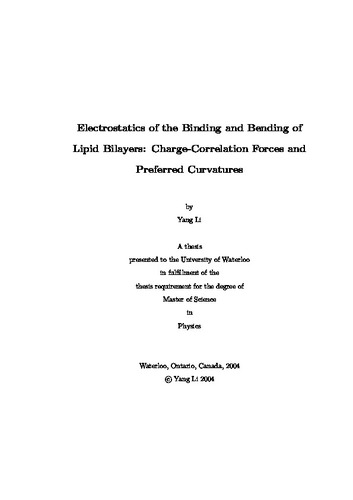 Lipid bilayers are key components of biomembranes; they are self-assembled two-dimensional structures, primarily serving as barriers to the leakage of cell's contents. Lipid bilayers are typically charged in aqueous solution and may electrostatically interact with each other and with their environment. In this work, we investigate electrostatics of charged lipid bilayers with the main focus on the binding and bending of the bilayers. We first present a theoretical approach to charge-correlation attractions between like-charged lipid bilayers with neutralizing counterions assumed to be localized to the bilayer surface. In particular, we study the effect of nonzero ionic sizes on the attraction by treating the bilayer charges (both backbone charges and localized counterions) as forming a two-dimensional ionic fluid of hard spheres of the same diameter <i>D</i>. Using a two-dimensional Debye-Hückel approach to this system, we examine how ion sizes influence the attraction. We find that the attraction gets stronger as surface charge densities or counterion valency increase, consistent with long-standing observations. Our results also indicate non-trivial dependence of the attraction on separations <i>h</i>: The attraction is enhanced by ion sizes for <i>h</i> ranges of physical interest, while it crosses over to the known <i>D</i>-independent universal behavior as <i>h</i> &rarr; &infin;; it remains finite as <i>h</i> &rarr; 0, as expected for a system of finite-sized ions. We also study the preferred curvature of an asymmetrically charged bilayer, in which the inner leaflet is negatively charged, while the outer one is neutral. In particular, we calculate the relaxed area difference &Delta; <i>A</i><sub>0</sub> and the spontaneous curvature <i>C</i><sub>0</sub> of the bilayer. We find &Delta; <i>A</i><sub>0</sub> and <i>C</i><sub>0</sub> are determined by the balance of a few distinct contributions: net charge repulsions, charge correlations, and the entropy associated with counterion release from the bilayer. The entropic effect is dominant for weakly charged surfaces in the presence of monovalent counterions only and tends to expand the inner leaflet, leading to negative &Delta; <i>A</i><sub>0</sub> and <i>C</i><sub>0</sub>. In the presence of even a small concentration of divalent counterions, however, charge correlations counterbalance the entropic effect and shrink the inner leaflet, leading to positive &Delta; <i>A</i><sub>0</sub> and <i>C</i><sub>0</sub>. We outline biological implications of our results.