Investigating the long-term effects of concussion on sensory gating 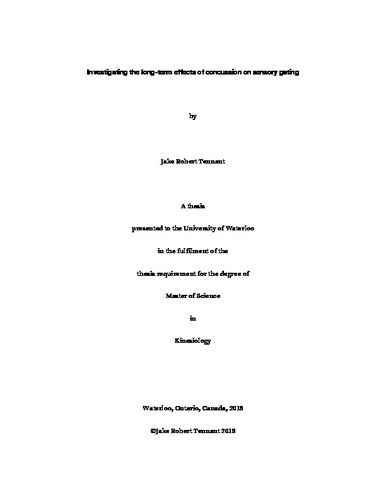 The prefrontal cortex (PFC) is a brain region critical for an abundance of neural processes. A vast amount of research employing both behavioural and neurophysiological methods has demonstrated significant impairments in prefrontal function following a concussion. Concussions are the result of biomechanical forces acting on the brain, resulting in diffuse neural disruption and often produce symptoms associated with altered perceptual experiences. Relevancy-based sensory gating is a phenomenon whereby incoming sensory information is selectively inhibited or facilitated based on its relevance to a given task. This process is thought to spare the nervous system from unnecessarily processing non-relevant information from the environment. Critically, the PFC is hypothesized to be largely responsible for this effect. This investigation sought to better understand the consequences of sustaining a concussion on the ability to effectively gate sensory information based on its specific relevance. Electroencephalography (EEG) was used to measure the cortical response to electrical stimulation of the median nerve while participants completed tasks that altered the relevance of somatosensory feedback generated by passive movements of the stimulated wrist. Results suggest that concussions may lead to altered sensory gating abilities. Relative to healthy controls, previously concussed participants demonstrated a delayed ability to selectively enhance specifically relevant somatosensory information. Additional findings from a wrist position matching task suggest that these effects may result in an early cost to performance, which quickly adapts to preserve overall sensorimotor function. Further research should aim to uncover the mechanisms producing these effects following a concussion, as well as the links between altered sensory gating and behaviour.