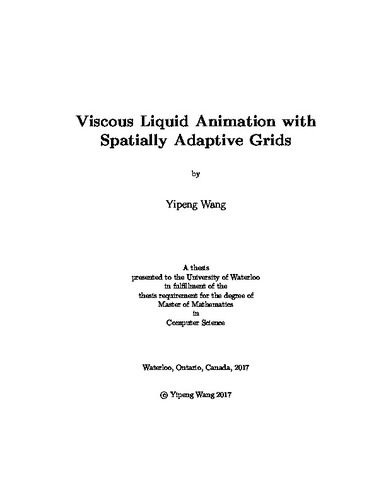 Viscous fluid behaviors are among the most complex yet familiar physical phenomena we encounter in everyday life. Much attention and investigation has been paid to the creation of visually realistic results, especially some unique effects such as folding and buckling, in computer graphics. However, simulation of viscous fluids requires more computational resources than its inviscid counterpart, since the viscous solve typically has lower sparsity and more degrees of freedom than the Poisson problem used to compute pressure forces. One interesting feature of viscous fluids is that the most important visual details happen at free surfaces of the fluid, while the interior flow remains relatively smooth. Therefore, a spatially adaptive grid with higher density of cells for fluid surfaces and lower density for the interior can be very useful in reducing computational resources and maintaining high-fidelity imagery at the same time. The focus of this thesis is to provide a method for simulating a highly viscous liquid on an adaptive quadtree grid, and generating visually plausible results. Aside from reviewing the techniques for viscous fluid simulation in computer graphics, we propose a new finite difference scheme to accurately compute the results at junctions where different levels of the quadtree are adjacent to each other. In addition, we apply the variational approach originally proposed by Batty and Bridson [2008] to this scheme, and generate a symmetric positive definite system on which a preconditioned conjugate gradient solver works very well. Thanks to the variational formulation, our method enforces the boundary condition at viscous free surfaces without the need of extra efforts. Lastly, this thesis presents a new scheme transferring velocities between an adaptive grid and a regular grid, which makes it easy to embed our viscosity solver into any grid-based inviscid fluid solver. We experimentally demonstrate that our method is first order accurate and achieves visual results that are qualitatively consistent with those of dense uniform grids, while reducing the number of degrees of freedom by a factor between 2 and 6, depending on the scenario.