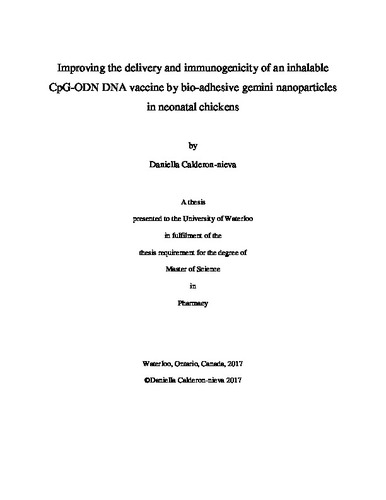 Cytosine-phosphodiester-guanine oligodeoxynucleotides (CpG-ODN) are nucleotide sequence motifs found in the bacterial genome that activate the mammalian innate immune response and have been found to boost humoral immunity when used as vaccine adjuvants in non-human primates and mice [1, 2]. Although species specific differences exist in the nature of the response, CpG-ODN can also activate chicken innate immune cells through the Toll-like receptor 21 (TLR 21) and has been found to protect against common bacterial infections in chickens such as Escherichia coli (E. coli) in neonatal broiler chicks after spray administration. The importance of CpG-ODN application is that the Canadian chicken industry voluntarily agreed to withdraw the prophylactic use of Category I antibiotics in poultry, which leaves chicks highly susceptible to infection and can result in high mortality rates and large economic losses. Owing to the relatively low manufacturing cost, and ease of customization of oligonucleotides [3], CpG-ODN administration is a highly attractive strategy against E. coli infection in neonatal broiler chicks. Especially because the development of a non-species-specific E. coli vaccine is difficult due to the genetic variation of E. coli. The objective of this thesis was to develop an inhalable nanoparticle CpG-ODN formulation that is superior to CpG-ODN on its own. Ultimately, the goal is to develop an inhalable nanoparticle carrier that can protect CpG-ODN, enhance innate immune stimulation, and prolong the protective effects in broiler chicks. In practice, oligonucleotides are highly susceptible to degradation in biological environments. Moreover, in the lung, mucociliary clearance and enzymatic clearance play a role in preventing optimal immune stimulation and delivery of the vaccine to immune “hot spots”. In the human lung, bio-adhesive polymers have shown to improve DNA delivery by increasing residence time in mucosal membranes. Gemini surfactant nanoparticles (NPs) are a novel nucleic acid delivery system that could deliver CpG-ODN to important innate immune activating cells for an optimal immune-protective effect. Bio adhesive polymers such as chitosan and polyvinylpyrolidone could also improve delivery of DNA to the lung. This work investigated how the physicochemical properties of nebulized bio adhesive polymer nanoparticle formulations influence delivery of the vaccine to the avian lung and activation of the innate immune response in comparison to CpG-ODN on its own. The dicationic gemini surfactants 12-3-12, 16-3-16, and 18-3-18 were used in combination with a phospholipid (DPPC), and different bio adhesive polymers to prepare various types of hybrid nanoparticles and assess their transfection efficiency in a chicken macrophage immortal cell line HD11. The transfection efficiency and toxicity of formulations was measured using flow cytometry. All formulations were also assessed in their capability to induce an innate immune response in HD11 cells by quantitating nitrite (nitric oxide) production using the Greiss assay. Size and zeta potential measurements were carried out using dynamic light scattering and fluorescence correlation spectroscopy to correlate physical parameters to transfection efficiency. Furthermore, confocal microscopy was used to evaluate cellular uptake after transfection. Finally, the biodistribution and ability to elicit a protective innate immune response in 1-day old chicks was tested for selected formulations. Of the six formulation groups developed in this thesis, gemini surfactant nanoparticles (G-NP), gemini-lipid (GL-NP), biopolymer coated gemini-lipid (BGL-NP) formulations, and chitosan-gemini (CG-NP) formulations were the most reproducible and stable formulations that could increase uptake and retention of CpG-ODN in comparison to naked unformulated CpG-ODN. These formulations were also able to elicit chicken macrophage activation, and generate protective responses in one-day old broiler chicks when challenged with pathogenic E. coli.