The Amalgamation of Brant County: Understanding Sense of Place and Public Participation 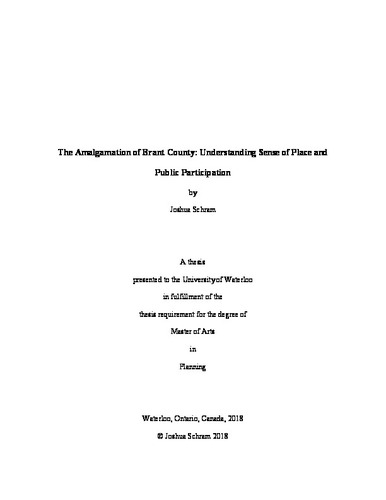 The purpose of this research is to explore the role of public consultation in the amalgamation process of Brant County, as well as to explore how amalgamation affected sense of place in this community. The research was conducted through a comprehensive literature review looking at amalgamation, public participation, and sense of place. Interviews with key informants were also conducted, with key informants being selected for having integral roles in the process of amalgamation. The study demonstrated that there was an attempt for considerable public participation through the amalgamation process, but that outside pressures from the province ultimately resulted in public opinion becoming inconsequential. The study also demonstrated that for most age cohorts sense of place was largely unaffected, with the older cohorts being most vocal about the negative effects of amalgamation on their communities. The findings of the study demonstrate that the province did not make a priority of public opinion when influencing the process of amalgamation.