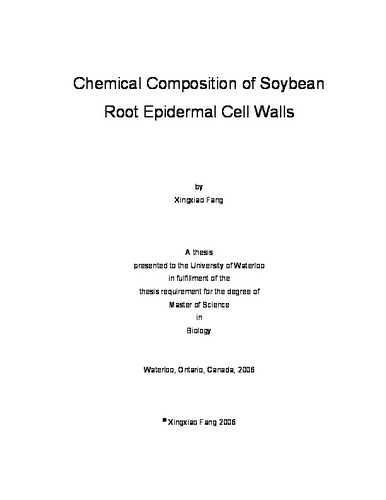 The root epidermis, being the outermost cell layer of the organ, is in contact with the soil environment. The position of the epidermis determines its important roles, such as taking up water and ions from the surrounding soil, and defending against harmful microorganisms. What is the chemical composition of the walls in this layer? The chemical nature of the soybean epidermal wall modifying substance was investigated in this study with the use of histochemical tests coupled with electron microscopy, and chemical depolymerizations in combination with chromatography. Soybean (<em>Glycine max</em>) was used as a test species in the present studay. Results of histochemical and electron microscopical studies indicated that the epidermal walls are modified with suberin. The suberized epidermal walls were permeable to apoplastic tracers, differing from those of cells with suberized Casparian bands, possibly due to the spatial distribution or chemical components of the suberin. Suberin may occur in a diffuse form linked with other wall components in the epidermis. What is the chemical nature of this modification, and does it play a role in pathogen resistance? The root epidermal wall compositions of two soybean cultivars were compared; one (cv. Conrad) is resistant to <em>Phytophthora sojae</em> and the other (cv. OX 760-6) is susceptible to this root-rot oomycete. Their epidermal walls were isolated enzymatically and subjected to two different degradation methods, i. e. BF<sub>3</sub>-MeOH transesterification and nitrobenzene oxidation. The compositions of depolymerisates of the cell walls determined by GC-MS indicated four dominant suberin monomers varying in chain length from C16 to C24. In all epidermal cell walls, &omega;-hydroxycarboxylic acids were more abundant than diacids, carboxylic acids and alcohols. Two of the monomers detected (hydroxycarboxylic acid and a,&omega;-dicarboxylic acid) are known to be characteristic suberin markers. The quantitative chemical compositions significantly differed in the epidermal cell walls of the two soybean varieties. Walls of the resistant cultivar (Conrad) had a greater quantity of both the aliphatic and aromatic components of the polymer than the susceptible cultivar (OX760-6), providing evidence to support the hypothesis that preformed suberin plays a role in plant defense.