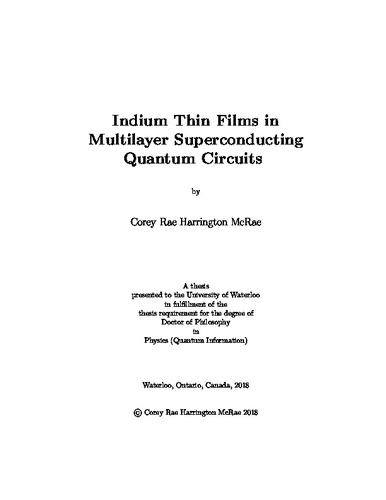 The superconducting quantum computer is an implementation of the quantum computer and a current leader the field in terms of performance and potential for scalability to large systems. Its two main components are the superconducting microwave resonator and the quantum bit (qubit). In Chapter 1, the concept of quantum computing is introduced, and the superconducting microwave resonator is explained in depth, along with a glimpse at the qubit and a description of two level system loss, the most prominent form of loss in low-power superconducting quantum circuits. Scalability is essential to the development of fault-tolerant quantum computing, as error correction requires a large array of quantum bits. The multilayer quantum circuit architecture is rising to the forefront as a solution to many of the scalability issues facing the field today. Chapter 2 summarizes some of these scalability issues, such as the suppression of unwanted modes and materials losses, and presents an overview of multilayer architectures applied to superconducting quantum circuits. The chapter further delves into indium bump bonding, an essential technique in multilayer circuit fabrication.In Chapter 3, we experimentally demonstrate a thermocompression bonding technology between on-chip indium thin films and apply it to capped superconducting devices. These devices can be used as a building block towards a more scalable architecture: the multilayer quantum circuit. We characterize the dc and microwave performance of these bonded devices at room temperature as well as cryogenic temperatures. At 10 mK, we find a small but significant dc bond resistance of 49.2μΩ cm2. A tunnel-capped, bonded device shows minimal microwave reflections and clean transmission up to 6.8 GHz compared to a similar uncapped device, demonstrating good performance. As a proof of concept, we fabricate and measure a set of tunnel-capped superconducting resonators, demonstrating marginal deterioration in resonator performance due to the bonding procedure. This work demonstrates that thermocompression bonding between thin on-chip indium films is a useful addition to the multilayer quantum circuit toolbox, and that this technique, when applied to form the tunnel-capped superconducting device, shows a promising step towards more scalable architectures. Indium is becoming ubiquitous in superconducting microwave circuits as it continues to be widely adopted as a bonding medium. However, the loss mechanisms in superconducting indium films have not been examined until now. In Chapter 4, we characterize microwave loss in indium and aluminium/indium thin films on silicon substrates by measuring superconducting coplanar waveguide resonators and estimating the main loss parameters at powers down to the sub-photon regime and at temperatures between 10 and 450 mK. We compare films deposited by thermal evaporation, sputtering, and molecular beam epitaxy. We study the effects of heating in vacuum and ambient atmospheric pressure as well as the effects of pre-deposition wafer cleaning using hydrofluoric acid. The microwave measurements are supported by thin film metrology including secondary-ion mass spectrometry. For thermally evaporated and sputtered films, we find that two-level states (TLSs) are the dominating loss mechanism at low photon number and temperature. Thermally evaporated indium is determined to have a TLS loss tangent due to indium oxide of∼5×10−5. The molecular beam epitaxial films show evidence of formation of a substantial indium-silicon eutectic layer, which leads to a drastic degradation in resonator performance.