Applications of claim investigation in insurance surplus and claims models 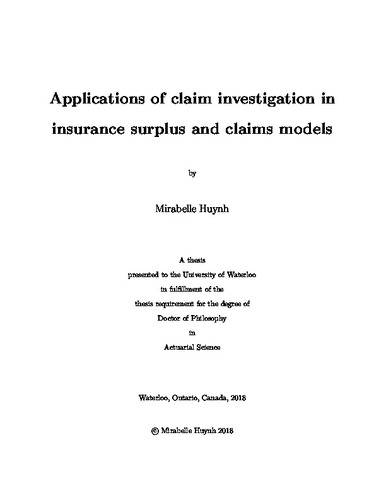 Claim investigation is a fundamental part of an insurer's business. Queues form as claims accumulate and claims are investigated according to some queueing mechanism. The natural existence of queues in this context prompts the inclusion of a queue-based investigation mechanism to model features like congestion inherent in the claims handling process and further to assess their overall impact on an insurer's risk management program. This thesis explicitly models a queue-based claim investigation mechanism (CIM) in two classical models for insurance risk, namely, insurer surplus models (or risk models) and aggregate claim models (or loss models). Incorporating a queue-based CIM into surplus and aggregate claims models provides an additional degree of realism and as a result, can help insurers better characterize and manage risk. In surplus analysis, more accurate measures for ruin-related quantities of interest such as those relating to the time to ruin and the deficit at ruin can be developed. In aggregate claims models, more granular models of the claims handling process (e.g., by decomposing claims into those that are settled and those that have been reported but not yet settled) can help insurers target the source of inefficiencies in their processing systems and later mitigate their financial impact on the insurer. As a starting point, Chapter 2 proposes a simple CIM consisting of one server and no waiting places and superimposes this CIM onto the classical compound Poisson surplus process. An exponentially distributed investigation time is considered and then generalized to a combination of n exponentials. Standard techniques of conditioning on the first claim are used to derive a defective renewal equation (DRE) for the Gerber-Shiu discounted penalty function (or simply, the Gerber-Shiu function) m(u) and probabilistic interpretations for the DRE components are provided. The Gerber-Shiu function, introduced in Gerber and Shiu (1998), is a valuable analytical tool, serving as a unified means of risk analysis as it generates various ruin-related quantities of interest. Chapter 3 extends and generalizes the analysis in Chapter 2 by proposing a more complex CIM consisting of a single queue with n investigation units and a finite capacity of m claims. More precisely, we consider CIMs which admit a (spectrally negative) Markov Additive Process (MAP) formulation for the insurer's surplus and the analysis will heavily rely and benefit from recent developments in the fluctuation theory of MAPs. MAP formulations for four possible CIM generalizations are more specifically analyzed. Chapter 4 superimposes the more general CIM from Chapter 3 onto the aggregate claims process to obtain an "aggregate payment process". It is shown that this aggregate payment process has a Markovian Arrival Process formulation that is preserved under considerable generalizations to the CIM. A distributional analysis of the future payments due to reported but not settled claims ("RBNS payments") is then performed under various assumptions. Throughout the thesis, numerical analyses are used to illustrate the impact of variations in the CIM on the ruin probability (Chapters 2 and 3) and on the Value-at-Risk (VaR) and Tail-Value-at-Risk (TVaR) of RBNS payments (Chapter 4). Concluding remarks and avenues for further research are found in Chapter 5.