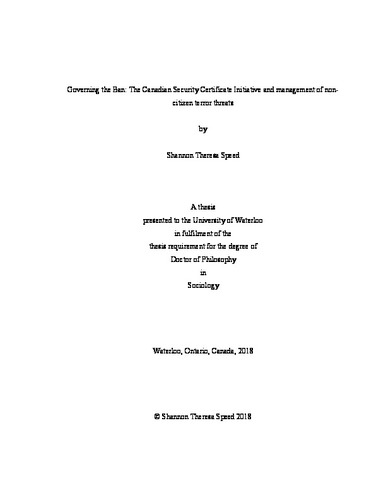 Security certificates were designed to act as orders for the immediate detention and expedited deportation of persons deemed to be threats to national security. Legislated during the Cold War when espionage was a heightened threat, the deployment of certificates as a counter-terrorism strategy is complicated by the resistance of persons named as threats to national security (“named persons”), legal counsel, and popular movements. This has resulted in protracted detention and delayed deportation for named persons. The failure of deportation objectives has resulted in a complex governing assemblage, one that enfolds procedures and personnel from various registers. Extended detainment has led to the borrowing of various technologies from the disciplinary apparatus, such as provincial detention centres, federal prisons, and conditional release strategies that make use of sureties. Elements of the legal apparatus are also incorporated: Special advocates are invented to deal with the issues of secrecy surrounding national security process as intelligence is introduced as ‘evidence’ in courts that are tasked with the problem of determining the reasonableness of certificates and associated detention. This blurring of intelligence and evidence risks the establishment of troubling precedent for immigration and criminal proceedings. An examination of the spatial-temporal (chronotopic) dimensions of certificate processes reveals how a state of insecurity can morph into an improvised assemblage combining security and legality. This examination of certificate proceedings provides insight into how non-citizen terrorism threats are managed in Canada and the implications of failing governance operations for justice.