Salvaging on the Coast of Erebus Bay: An Analysis of Inuit Interaction with Material from the Franklin Expedition 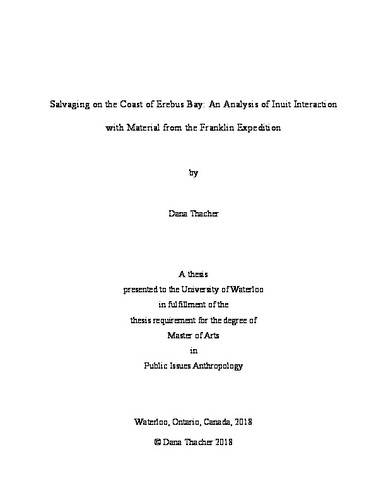 Over the course of the 19th century, many European explorers sailed in search of a Northwest Passage through the Canadian Arctic. These journeys brought them into territory occupied by Inuit, who both traded with the explorers for various goods and interacted with the material that they left behind. The Inuit then sometimes altered these goods to suit their own needs and the alterations had the potential of ascribing new meaning to the material that was different from what the European manufacturers intended. In this research, I will examine the remains of two ship’s boats from three sites on King William Island (NgLj-2, NgLj-3, and NgLj-8) that were abandoned by members of the Franklin expedition and subsequently found and altered by an Inuit sub-group called the Netsilik to reveal the motivational factors behind their actions. By combining the conceptual frameworks of entanglement and salvage, it appears that Inuit utilized these boats in a manner that reflects (1) their environment, (2) what the material afforded, (3) their past experiences with Europeans and European material, and (4) their intended uses of the material.

Dana Thacher (2018). Salvaging on the Coast of Erebus Bay: An Analysis of Inuit Interaction with Material from the Franklin Expedition. UWSpace. http://hdl.handle.net/10012/12795