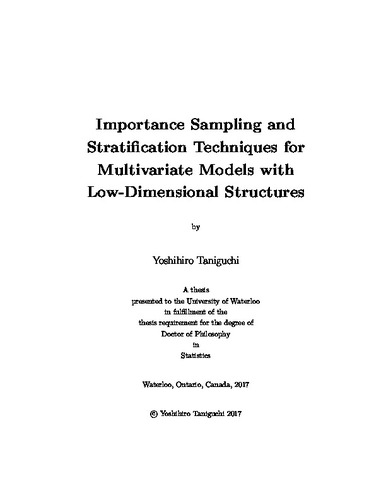 Many problems in finance and risk management involve the computation of quantities related to rare-event analysis. As many financial problems are high-dimensional, the quan- tities of interest rarely have analytical forms and therefore they must be approximated using numerical methods. Plain Monte Carlo (MC) is a versatile simulation-based numer- ical technique suitable to high-dimensional problems as its estimation error converges to zero at a rate independent of the dimension of the problem. The weakness of plain MC is the high computational cost it requires to obtain estimates with small variance. This issue is especially severe for rare-event simulation as a very large number, often over millions, of samples are required to obtain an estimate with reasonable precision. In this thesis, we develop importance sampling (IS) and stratified sampling (SS) schemes for rare-event simulation problems to reduce the variance of the plain MC estimators. The main idea of our approach is to construct effective proposal distributions for IS and partitions of the sample space for SS by exploiting the low-dimensional structures that exist in many financial problems. More specifically, our general approach is to identify a low-dimensional transformation of input variables such that the transformed variables are highly correlated with the output, and then make the rare-event more frequent by twisting the distribution of the transformed variables by using IS and/or SS. In some cases, SS is used instead of IS as SS is shown to give estimators with smaller variance. In other cases, IS and SS are used together to achieve greater variance reduction than when they are used separately. Our proposed methods are applicable to a wide range of problems because they do not assume specific types of problems or distribution of input variables and because their performance does not degrade even in high dimension. Furthermore, our approach serves as a dimension reduction technique, so it enhances the effectiveness of quasi-Monte Carlo sampling methods when combined together. This thesis considers three types of low-dimensional structures in increasing order of generality and develops IS and SS methods under each structural assumption, along with optimal tuning procedures and sampling algorithms under specific distributions. The assumed low-dimensional structures are as follows: the output takes a large value when at least one of the input variables is large; a single-index model where the output depends on the input variables mainly through some one-dimensional projection; and a multi-index model where the output depends on the input mainly through a set of linear combinations. Our numerical experiments find that many financial problems possess one of the assumed low-dimensional structure. When applied to those problems in simulation studies, our proposed methods often give variance reduction factors of over 1,000 with little additional computational costs compared to plain MC.