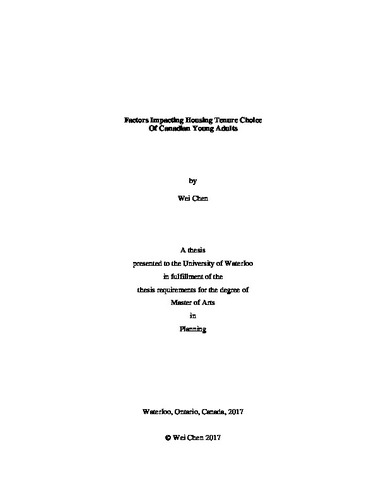 Deteriorating housing affordability is a pressing issue in Canada. Whereas there was a sustained housing market correction in the United States after the 2008 global financial crisis, the price of housing in major Canadian markets has since continued to reach record highs. Under the current neoliberal system, housing tenure critically impacts wealth trajectories. A lack of housing affordability in an asset-based welfare system that is mainly dependent on homeownership is very concerning. Young adults are the most disadvantaged by this issue as this age group enters into the lifecycle stage that has traditionally been marked by first-time entry into homeownership. This thesis aims to better understand the factors impacting tenure choice of Canadian young adult (25-34) households in order to inform public policy which will improve the future welfare prospects of this generation. A cross-sectional tenure choice study is first conducted through identical individual logistic regression models for the years 1999 and 2012 using data from the Statistics Canada Survey of Financial Security. The predictors of tenure choice included in the models are age, household type, number of earners, educational attainment, market income, liquid wealth, student loans, and region. The logit models estimate the effects of these socio-demographic and economic household factors on homeownership in 1999 and in 2012. Housing policy forces influencing household tenure choice cannot be quantitatively approximated in the models, but past literature has stressed their importance. Thus, the effects of policy changes over time are analyzed through the differences between the results of the tenure choice models for the two years. Additionally, an interaction model is used to test whether these differences over time are statistically significant. This tenure choice study shows that young adult households generally choose to enter homeownership if they are financially capable of doing so. However, the impact of rising housing prices is evident in the characteristics of young adult homeowners. Having a higher odds of homeownership in 2012 requires households to have an older major income earner, more earners in the household, higher educational attainment, and higher income. This also means that higher numbers of households are 'locked-out' of homeownership. In addition to mortgages, non-mortgage debt has a larger role in financing young adult homeownership over time. However, relatively smaller flexible asset buffers put these households at great financial risk of delinquency. This study also provides quantitative evidence that student loan debt decreases the odds of homeownership. More detailed explanations of these results are discussed as well as their policy implications.