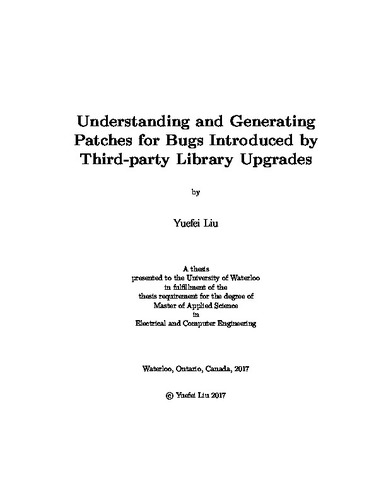 During the process of software development, developers rely heavily on third-party libraries to enable functionalities and features in their projects. However, developers are faced with challenges of managing dependency messes when a project evolves. One of the most challenging problems is to handle issues caused by dependency upgrades. To better understand the issues caused by Third-party Library Upgrades (TLU), in this thesis, we conduct a comprehensive study of the bugs caused by dependency upgrades. The study is conducted on a collection of 8,952 open-source Java projects from GitHub and 304 Java projects on Apache Software Foundation (ASF) JIRA systems. We collect 83 bugs caused by inappropriate TLUs in total. Our inspection shows that TLUs are conducted out of different reasons. The most popular reason is that the project is preparing for release and wants to keep its dependencies up-to-date (62.3%). Another popular reason is that the older version of a dependency is not compatible with other dependencies (15.3%). Our inspection also indicates that the problems introduced by inappropriate dependency upgrades can be categorized into different types, i.e., program failures that are detectable statically and dynamically. Then, we investigate developers’ efforts on repairing bugs caused by inappropriate TLUs. We notice that 32.53% of these bugs can be fixed by only modifying the build scripts (which we call TLU-build bugs), 20.48% of them can be fixed by merely modifying the source code (which is called TLU-code bugs), and 16.87% of them require modifications in multiple sources. TLU-build bugs and TLU-code bugs as the two most popular types, are explored more by us. For TLU-code bugs, we summarize the common ways used to fix them. Furthermore, we study whether current repair techniques can fix TLU-code bugs efficiently. For the 14 TLU-code bugs that cause test failures and runtime failures, the study shows that existing automated program repair tools can only work on 6 of the 14 investigated bugs. Each of them can only fix a limited amount of the 6 bugs, but the union of them can finally fix 5 out of 6 bugs. For TLU-build bugs, by leveraging the knowledge from our study, we summarize common patterns to fix build scripts, and propose a technique to automatically fix them. Our evaluation shows the proposed technique can successfully fix 9 out of 14 TLU-build bugs.