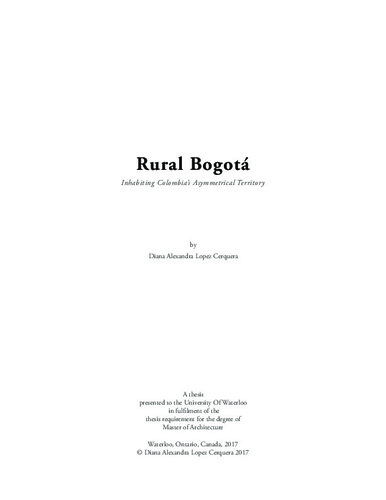 Throughout the twentieth century, rural Colombia experienced a series of forces which acted as catalysts for the inequalities found within the territory and instigated the agrarian and armed conflicts – two national crisis that precipitated the implosion of the countryside and the explosion of the urban. This shift in the spatial organizational model of Colombia produced an asymmetrical perspective towards the evolution of the urban-rural landscape and caused an extensive number of farmers to be displaced, either voluntarily or by force. As a result, cities, such as Bogotá D.C., began to proliferate in the countryside, forming an urban-rural dichotomy where governmental authorities directed the implementation of planning strategies geared towards the evolution of the urban, at the expense of resolving the rural issues. Consequently, the agrarian and armed territorial conflicts created tensions over the contemporary and potential use of Colombia’s landscape and in turn impacted the environmental and social structure of the countryside. This change in structure is particularly heightened in regions constituting an urban-rural fringe, such as Usme, a region situated in the Capital District of Bogotá. However, in 2016, the internal armed conflict ended, presenting an opportunity to include the farmers as social and productive agents in the transformation of the countryside and the future development of Colombia. This has become especially important since the national government began implementing a restitution program for victims of the conflict. As a result, this thesis seeks to seize the opportunities offered in post-conflict Colombia to instigate the transformation of the countryside beginning at the contested urban-rural edge. Furthermore, this thesis analyzes the evolution of the Colombian territory and the planning strategies that led to the urban-rural dichotomy within the nation to create a development strategy that recognizes the potential of the countryside as an agent to generate a productive exchange between the farmers and city-dwellers.