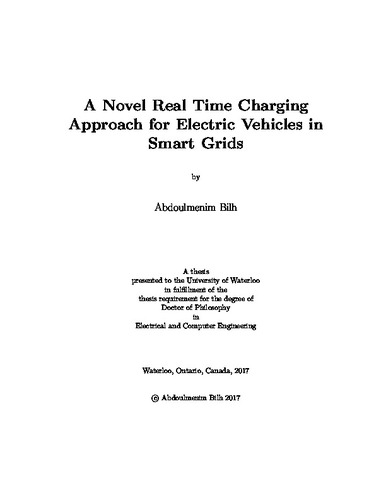 Integration of renewable energy sources (RES) into electric grids comes with significant challenges. The produced energy from renewable sources such as wind and solar is intermittent, non-dispatchable, and uncertain. The uncertainty in the forecasted renewable energy will consequently impact the accuracy of the forecasted net-load in the system. That, in turn, will increase the difficulties for the grid operators to meet the demand-supply balance in the grids. Fortunately, electric vehicles (EVs) are considered as a flexible load in the electric grids. The flexibility is due to the fact that vehicles in general are parked for longer time than needed to charge them. This flexibility in the EVs’ load can potentially be used to counter the variations in the net-load. This thesis proposes a novel charging algorithm for EVs. The algorithm uses the flexibility of EVs in order to absorb the unexpected fluctuations in the net-load caused mainly by the stochastic behavior of RES; therefore, it reduces the dependency on the expensive operational reserve needed otherwise to deal with these fluctuations. The dissertation starts by evaluating the impact of the RES on the short-term forecast of the net-load in the electric grid. A stochastic model for the net-load forecast error is developed. The model captures the behaviour of the net-load forecast error for different penetration levels of wind power. Second, a novel charging algorithm for EVs in smart grids is proposed. Unlike traditional charging methods, this algorithm is designed to exploit the flexibility of the EVs’ load to absorb the unforeseen fluctuations in the net-load caused mainly by the intermittency of the RES (wind energy). A comprehensive performance evaluation of the proposed algorithm against a traditional Ahead-of-Time charging algorithm shows clear improvements achieved by the proposed algorithm in absorbing the unexpected fluctuations in the net-load caused by different penetration levels of wind power. Third, the algorithm used, further, to provide regulation services to the grid. An aggregator server uses binary on-off commands to guide the EVs in order to provide the regulation service as opposed to adjusting the charging rates of the EVs to any value between zero and the maximum charging rate in most of the other studies in the literature. A unidirectional regulation method has been used as a benchmark to show the superiority of our method. Further, to realistically represent the plug-in time and plug-off (deadline) time of the EVs, data from the US Department of Transportation (DOT) have been used in the testing scenarios. Fourth, an important aspect of the proposed algorithm is the fast response to the need of the electric system either to counter the variation in the net-load in the distribution system or to provide regulation service to the grid. Therefore, the thesis precisely evaluates the expected time delay from the instant when an aggregator server sends a command to n EVs to the instant when all the EVs’ responses are received successfully by the server. To achieve this goal, two steps are taken: i) a realistic communication structure between the aggregator server and the EVs is considered. ii) The wireless link between the access point (AP) and the EVs is accurately modeled in order to estimate the average delay. The model is based on Markov chain representation for the wireless IEEE 802.11 MAC protocol. The model has been validated by means of extensive simulation using the well-known Network Simulator 2 (NS2) tool.