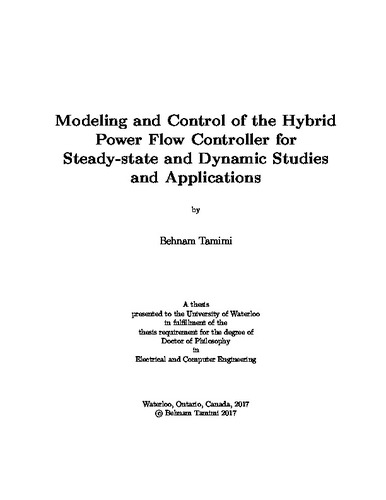 Flexible ac transmission system (FACTS) controllers offer new opportunities to better control power systems, and can address some of the critical challenges faced by the grid, especially in the context of smart grids. Furthermore, the smartening of distribution systems with distributed generation, storage devices, and intelligent loads have created challenges for the operation of distribution feeders, which can be addressed adequately with power-electronics based controllers and FACTS controllers for distribution systems. However, the capital intensive nature of these controllers is a major obstacle for a wide application of this technology in power systems. A cost effective FACTS controller has been introduced in the literature, which yields operating characteristics similar to those of the versatile Unified Power Flow Controller (UPFC). This device consists of converters as well as passive components, and is referred to as the Hybrid Power Flow Controller (HPFC). The study of the HPFC and its performance in electric power systems requires adequate and relevant models representing the device behavior according to the intended studies, such as steady state or time-domain dynamic analyses; moreover, the benefits of an HPFC are determined by its limits and operating constraints. Therefore, static and dynamic models of the HPFC for transmission and distribution system applications are proposed and studied in this work. First, steady-state models of the HPFC for power flow and optimal power flow (OPF) studies are proposed in this work, considering its multiple control modes and operating constraints. Thus, a strategy for control limit handling in power flow calculations is proposed, while considering a discrete passive shunt capacitor bank in the device. Moreover, an OPF model of the device is proposed and explained in detail, representing all the device control and physical limits as constraints in the mathematical formulation, so that the HPFC can be optimally dispatched as a part of the transmission system control assets; this model is used to determine the optimal ratings of the device based on a cost--benefit analysis. The proposed power flow and OPF models are tested and validated based on several loadability studies on a two-area benchmark test system. The HPFC power flow model is also tested and applied to a detailed model of Ontario grid and its neighboring networks with more than 6000 buses. The analyses demonstrate the application of the models for planning and operation studies, evaluating the performance and the effectiveness of the device based on realistic studies and scenarios. Second, the merits and the added value of the HPFC application to distribution systems are discussed here through detailed modeling and time-domain simulations, examining its impact on a distribution network under different conditions. Thus, a detailed dynamic representation of the HPFC is developed and implemented in PSCAD/EMTDC, describing and proposing control strategies to properly operate this controller in distribution system applications, such as an effective and simple procedure for starting-up the device. The developed model is used to demonstrate the effectiveness of the controller for solving problems in distribution systems, such as voltage sags associated with feeder faults and power flow fluctuations due to intermittent renewable generation using a benchmark network as an illustrative example.

Behnam Tamimi (2017). Modeling and Control of the Hybrid Power Flow Controller for Steady-state and Dynamic Studies and Applications. UWSpace. http://hdl.handle.net/10012/12750