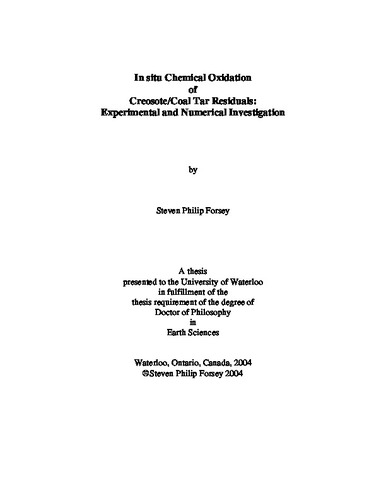 Coal tar, coal tar creosote and oily wastes are often present as subsurface contaminants that may migrate below the water table, leaving a widely distributed residual source of contaminants leaching to the ground water. <i>In situ</i> chemical oxidation is a potentially viable technology for the remediation of aquifers contaminated with creosote and coal tars. The oxidant of choice would be flushed through the contaminated area to oxidize aqueous contaminants and enhance the mass transfer of contaminants from the oil phase. A series of batch and column experiments were performed to assess the ability of a chemical oxidizing reagent to oxidize creosote compounds and to increase mass transfer rates. Results from the column experiments were then simulated using a reactive transport model that considered 12 different creosote compounds undergoing dissolution, oxidation and advective-dispersive transport. Three strong chemical oxidizing reagents, Fenton's Reagent, potassium persulfate with ferrous ions, and potassium permanganate were tested with batch experiments to determine their reactivity towards creosote compounds. All three reagents successfully decomposed aqueous creosote compounds and were able to reduce the mass of the monitored creosote compounds within the oil phase. However, both the Fenton's and persulfate reagents required large molar ratios of iron and peroxide because the precipitation of iron continually removed the iron catalyst from the aqueous phase. Fenton's and persulfate reagents could be used in systems that are allowed to become acidic to solubilize the iron, but the cost of adjusting the pH, potential impact on aquifer geochemistry and the short lived free radical reaction make these reagents less practical than KMnO4. KMnO4 oxidizes a wide variety of creosote compound, can be used at very high concentrations, and its concentration will not be reduced significantly as it moves through the zone of contamination. The feasibility of using potassium permanganate as an oxidizing reagent for <i>in situ</i> treatment of creosote residuals was investigated using batch column experiments. Column experiments were conducted at a neutral pH in a carbonate rich sand matrix with creosote at 8 % saturation. The columns were treated intermittently with simulated ground water or KMnO4 dissolved in simulated ground water (8 g/L) for 172 days. Under these experimental conditions the KMnO4 decreased the initial mass of the monitored creosote compounds by 36. 5%, whereas in the control column (no oxidizer) only 3. 9% was removed. To remove all of the monitored creosote compounds from the columns it was calculated that the volume needed would be 40 times less for the KMnO4 solution, compared to flushing alone with simulated ground water. To evaluate the potential effectiveness of <i>in situ</i> chemical oxidation at field sites, numerical model simulations need to incorporate relevant chemical oxidation rates to assess system performance and to provide design guidance. In-depth kinetic studies were performed to determine rate constants and to gain insight into the oxidation of creosote compounds with KMnO4. The study examined the kinetics of the oxidative treatment of a selected group of creosote/coal tar compounds in water using excess potassium permanganate and investigated the correlation between reactivity and physical/chemical properties of the organic pollutants. The oxidation of naphthalene, phenanthrene, chrysene, pyrene, 1-methylnapthalene, 2-methylnaphthalene, acenaphthene, fluorene, carbazole, isopropylbenzene, ethylbenzene and methylbenzene closely followed first-order reaction kinetics, enabling calculation of second-order rate constants. Fluoranthene was only partially oxidized by permanganate and the oxidation of anthracene was too fast to be measured. Biphenyl, dibenzofuran, benzene and tert-butylbenzene failed to react in this study. Comprehensive column experiments complemented by numerical modeling revealed an unequal enhancement of the removal of creosote compounds from the oil phase. For the more readily oxidizable compounds such as pyrene and naphthalene, a significant increase in the mass transfer rates was observed in the oxidation columns, compared to the oxidant free column. For non-oxidizable compounds such as biphenyl and dibenzofuran, an increase in the rate of mass removal was also observed in the oxidation columns, even though their aqueous concentrations were not reduced in the column. This was due to the rapid removal of the more readily oxidizable compounds from the oil, which increases the mole fraction of the non-oxidizable compounds. Thus according to Raoult's Law, the concentration in the aqueous phase becomes closer to its pure phase liquid solubility and its aqueous concentration increases. The most significant result of the experiments is the observed increase in the rate of removal of those compounds that have low aqueous solubilities and are readily oxidized, such as pyrene and fluorene. Compounds that have low aqueous solubilities and are not readily oxidizable, such as chrysene, may still take a long period of time to be removed, but the removal time is greatly reduced with oxidation compared to flushing the area with water alone.