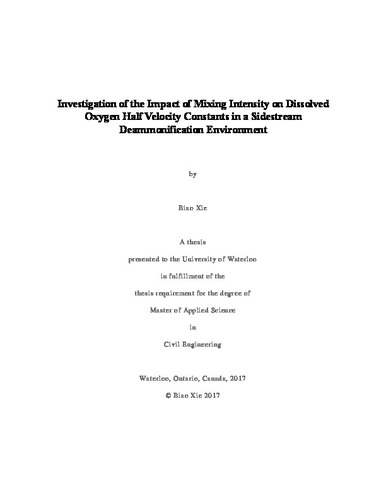 The liquid waste (centrate) from the dewatering stage in the solids treatment stream (sidestream) of a wastewater treatment plant is typically rich in ammonium. If this centrate is recycled to the wastewater treatment stream (mainstream), the aeration requirements in the mainstream bioreactor will increase. A new technology, sidestream deammonification, has been developed to reduce the loading of ammonium from the sidestream to the mainstream. However, this and similar technologies require delicate control of the dissolved oxygen (DO) in the bulk liquid. Therefore, improved knowledge of factors influencing the DO half-velocity constants (K_O2) of the functional organisms in the sidestream treatment will enhance the control of the growth of these organisms and ultimately nitrogen removal efficiency. The impact of mixing conditions on K_O2 values was investigated in this study. Experiments were conducted in a quasi-sequencing batch reactor (SBR) to reproduce a sidestream deammonification environment treating dewatering centrate. Once steady-state conditions were established, the mixer speed was changed from the initial setting of an average velocity gradient of 15/s at 8.0 L to 5.3/s at 8.0 L (from 150 rpm to 75 rpm) while maintaining other parameters constant. The objective of this study was to demonstrate the impact of mixing intensity on the estimated K_O2 values of ammonium oxidizing bacteria (AOB) and anaerobic ammonium oxidizing (Anammox) bacteria. The effect of mixing intensity was assessed in terms of overall nitrogen removal efficiency in the SBR and by examining the magnitude of K_O2 values of AOB (K_O2^AOB) and Anammox bacteria (K_O2^Anammox) that were determined in activity tests. Nitrogen removal efficiency during steady-state conditions increased from 62% to 84%; and the value of estimated K_O2^Anammox increased statistically significantly for the lower mixing intensity condition. However, the value of the estimated K_O2^AOB remained statistically the same. In conclusion, this research showed that mixing intensity had an impact on the estimated K_O2^Anammox value and nitrogen removal in the SBR.

Biao Xie (2017). Investigation of the Impact of Mixing Intensity on Dissolved Oxygen Half Velocity Constants in a Sidestream Deammonification Environment. UWSpace. http://hdl.handle.net/10012/12745