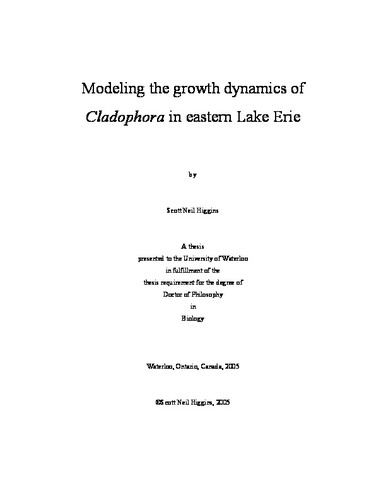 <em>Cladophora glomerata</em> is a filamentous green alga that currently forms extensive blooms in nearshore areas of Lake Ontario, eastern Lake Erie, Lake Michigan, and isolated locations in Lake Huron. The biomass, areal coverage, algal bed characteristics, and tissue phosphorus concentrations of <em>Cladophora glomerata</em> were measured at 24 nearshore rocky sites along the northern shoreline of Lake Erie?s eastern basin between 1995-2002. Midsummer areal coverage at shallow depths (&le;5m) ranged from 4-100 %, with a median value of 96%. Peak seasonal biomass ranged from <1 to 940 g m<sup>-2</sup> dry mass (DM), with a median value of 171 g m<sup>-2</sup> DM. Tissue phosphorus varied seasonally, with initial high values in early May (0. 15 to 0. 27 % DM; median 0. 23 % DM) to midsummer seasonal low values during peak biomass (0. 03 to 0. 23 % DM; median 0. 06 % DM). A numerical <em>Cladophora</em> growth model (CGM) was revised and field-tested at 5 sites in eastern Lake Erie during 2002. The CGM is useful for: 1) Predicting <em>Cladophora</em> growth, biomass, and tissue phosphorus concentrations under non-point source P loading with no depth restrictions; 2) providing estimates of the timing and magnitude of the midsummer sloughing phenomenon; 3) determining the contribution of <em>Dreissena</em> invasion to the resurgence of <em>Cladophora</em> in eastern Lake Erie; and 4) developing management strategies for <em>Cladophora</em> abatement. The CGM was applied to investigate how the spatial and temporal patterns of <em>Cladophora</em> growth were influenced by the natural variability in environmental parameters in eastern Lake Erie. Seasonal patterns in <em>Cladophora</em> growth were strongly influenced by temperature, and peak depth-integrated biomass was strongly influenced by both available light and phosphorus. The photosynthetic capacity of field collected <em>Cladophora</em> was a poor predictor of the mid-summer sloughing phenomenon. The CGM, however, predicted that self-shading within the dense <em>Cladophora</em> mats would have caused negative growth rates at the base of the dense mats for 14 days prior to the sloughing event. The metabolic imbalances at the base of the <em>Cladophora</em> mats were driven primarily by the availability of light and were exacerbated by intermediate water temperatures (~23°C). The excellent agreement between model simulations and field data illustrates the ability of the CGM to predict tissue P and growth over a range of sites and depths in eastern Lake Erie and suggests potential for the model to be successfully applied in other systems.