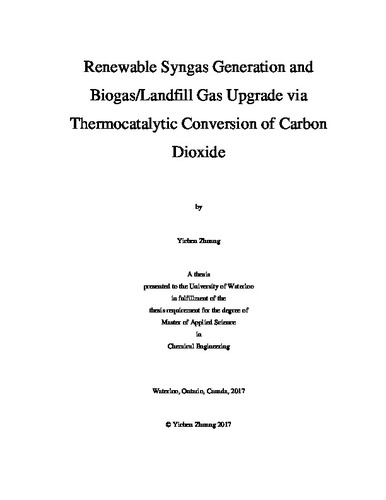 The reverse water gas shift (RWGS) and thermocatalytic Sabatier reaction can be potentially used to convert captured CO2 or biogas/landfill gas into renewable synthetic fuels via syngas generation or production of renewable natural gas. However, these conversion pathways have not been yet realized because of a number of technological challenges, including a lack of catalysts that possess satisfactory catalytic performance. Also, biogas and landfill gas are rich in both carbon dioxide (CO2) and methane (CH4) so the CO2 content (up to 50vol%) has to be eliminated prior to the use. In the first part of this research project, the RWGS reaction over the 0.5wt% Ru-promoted 40wt% Cu/ZnO/Al2O3 catalyst is studied. Due to the Ru addition, CO2 conversion was improved by over 100% as compared to the baseline Cu/ZnO/Al2O3 catalyst. The catalyst stability was significantly improved as well. Although Ru is known for its high activity in methanation reactions, the 0.5wt% Ru-Cu/ZnO/Al2O3 catalyst maintained complete selectivity to CO formation. In order to investigate this intriguing finding, a series of catalysts were synthesized by gradually removing the catalyst components and varying the synthesis procedure. It has been found that the Ru-support interaction and Ru oxidation state are crucial factors with respect to CH4 formation suppression. As an alternative to CO2 separation, CO2 contained in biogas and landfill gas can be potentially converted into synthetic CH4, upgrading these waste streams to a pipeline quality renewable natural gas (RNG). In the second part of this research project, a series of 0.02-1wt% Ru/Al2O3 catalysts were evaluated for their performance in a single-pass conversion of 50:50 CO2/CH4 mixture into synthetic CH4. For the 0.1-0.5wt% Ru catalysts, CO2 conversion of as high as 80% was achieved at 450 °C, while maintaining 95% selectivity to CH4 production over CO. These catalysts also showed excellent stability that, alongside with superior selectivity and good conversion, opens a possible avenue for practical applications.