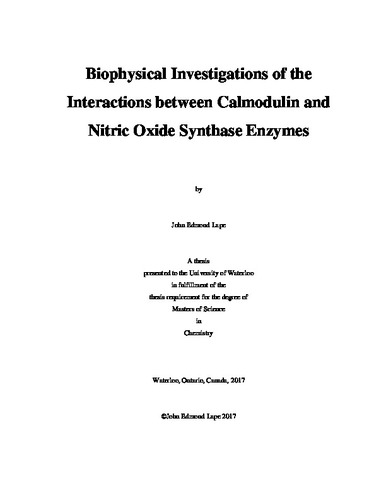 Nitric Oxide (•NO) is an essential biomolecule that has physiological functions in neurotransmission, vasodilation and immune response. •NO is produced by a family of enzymes known as nitric oxide synthases (NOS). NOS catalyze the conversion of L-arginine into L-citrulline and •NO. Due to their physiological relevance, abnormal •NO production by NOS has been linked to several disease states. There are three isoforms found in mammalian cells: neuronal (nNOS), endothelial (eNOS), and inducible (iNOS), each involved in different physiological processes. Both nNOS and eNOS are constitutively expressed and are therefore referred to as cNOS enzymes. In contrast, iNOS is transcriptionally regulated by cytokines in macrophages. NOS are homodimeric proteins comprised of an N-terminal heme-oxygenase domain and a C-terminal flavin-binding reductase domain, linked together via a calmodulin (CaM) binding domain. Lastly, NOS activity is regulated by a small ubiquitous Ca2+-binding protein known as Calmodulin (CaM). Interestingly, cNOS isozymes are Ca2+-dependent in terms of CaM binding, whereas iNOS is Ca2+-independent. The exact mechanism of CaM’s control over •NO production is not yet fully understood. Evidence suggests that CaM triggers a large conformational change in NOS to occur that allow for efficient electron transfer. In addition, past studies have investigated how varying different structures and elements within CaM affect NOS catalytic activity through the use of CaM mutants in NOS activity assays. These assay methods have shown to be expensive, lengthy and labour intensive. There is a need for a more facile and robust method to evaluate NOS-CaM interactions. In this investigation, the NOS-CaM interaction was further characterized by observing the binding kinetics of previously studied CaM mutant proteins binding to peptides that corresponded to the CaM-binding domain of all three NOS isoforms through the use of a spectroscopic technique known as surface plasmon resonance (SPR). SPR is an optical phenomenon that measures and quantifies the adsorption of compounds onto conducting metal surfaces. This SPR study was used to correlate the binding kinetics of mutant CaM proteins with previous enzyme kinetic investigations. In addition, we attempted to improve current methods to measure NOS activity through the creation of a NOS electrochemical biosensor. Electrochemical biosensors utilize the catalytic activities of redox enzymes immobilized onto electrode surfaces where the biological activities of these enzymes are converted into measurable electrical signals. However, there is evidence of current electrochemical platforms that show denaturation of these redox enzymes when directly immobilized on electrode surfaces. As a way to circumvent the known denaturation of these electrode immobilized enzymes, we used a modified CaM protein tether to indirectly immobilize NOS enzymes. We used the SPR platform as a preliminary immobilization test for NOS, but overall, we were not able to achieve specific binding. The development of a viable NOS electrochemical biosensor would allow for a high throughput method to measure NOS activity.