Studies of Interaction of Small Molecules with Water Condensed Media 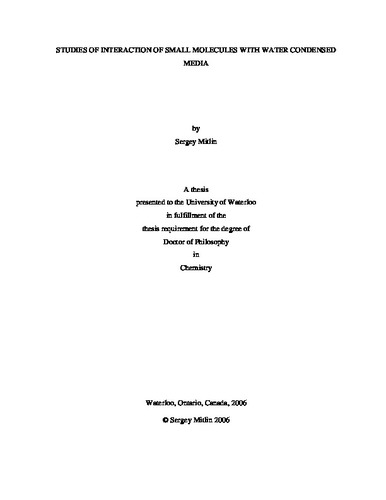 STUDIES OF INTERACTION OF SMALL MOLECULES WITH WATER CONDENSED MEDIA<br /><br /> The present work reports experimental and theoretical studies of the intermolecular interactions in condensed water media. The chemical objects comprise pristine ice and polar organic substances: acetone, acetaldehyde, methanol and chloroform and bi-component water-organic deposits. The experimental part of the studies includes the Fourier Transform Infrared Reflection Absorption spectral (FTIR RAS) examination of the processes of film growth by vapor deposition on cold metal substrate and subsequent annealing. The theoretical studies include <em>ab initio</em> (<em>MP2</em>) and semi-empirical (<em>B3LYP</em>) calculations on the small water and water-organic clusters and classical molecular dynamics simulations of the adsorption of inert guests (Xe/Rn) on the ice surface. The FTIR RA spectral studies reveal that depending on the deposition conditions condensed water media exist in two principal structural forms: noncrystalline and polycrystalline. The former is characterized by porous structure while the latter exists as a non-porous medium with smooth external interface. On annealing, characteristic spectral changes indicate on a rapid crystallization occurring at a certain temperature range. The initial adsorption of organic molecules is accompanied by the hydrogen-bonded coordination between the functional group of organic species and non-coordinated hydroxyl group of the ice surface, the topology of which depends on the electronic properties of the functional group. The computational studies of small water-organic clusters reveal, in particular, two major coordination minima for carbonyl group: a single hydrogen-bonded in-plane complex and a double hydrogen-bonded in-plane complex. The classical molecular dynamics of Xe/Rn species on the ice interface is consistent with two distinctly different surface adsorption sites: one that delocalized over the entire surface and one that confined to small opening in the top ice layer, disrupted by the thermal molecular motion. The penetration barrier is associated with van der Walls repulsion of guest species from the ordered water hexagonal arrangement. A thermo-disruption of latter leads to a rapid diffusion of guest species inside ice medium.