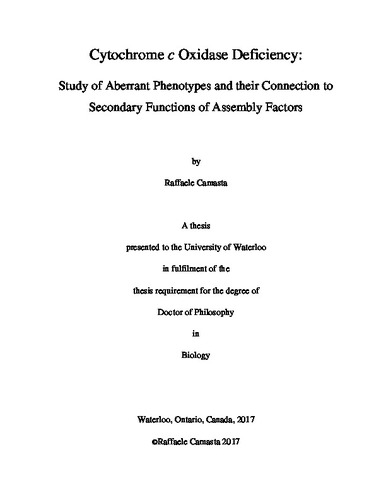 Mitochondria are double membrane-bound organelles present in all eukaryotic organisms and are involved in myriad cellular pathways. Cytochrome c oxidase (COX) is a mitochondrial inner membrane protein complex that is an essential component of the electron transport chain. The assembly of this multi-subunit protein complex is aided by the activities of proteins referred to as COX assembly factors. Mutations in COX assembly factors result in assembly failure and therefore cause COX deficiencies, which are associated with human diseases, such as Leigh syndrome. In this study, we used the model organism Saccharomyces cerevisiae to characterize phenotypes resulting from the loss of any one of a subset of COX assembly factors in cells grown to stationary phase. The vast majority of studies that involve yeast mitochondria have been performed in cells at late exponential phase/early diauxic shift, while the behaviours of mitochondrial mutants at stationary phase are still largely unexplored. Analyses of cellular functions such as growth, viability and budding index led us to uncover phenotypic differences among the COX assembly mutant strains that were further investigated as a first step towards identifying potential secondary functions of these proteins. Analysis of the cell cycle in a wild-type, respiratory competent strain and in COX assembly mutants led to the novel finding that strains unable to synthesize proteins involved in COX copper metalation, namely Cox17, Sco1 and Cox11, are characterized by a cell cycle progression defect. The same strains also displayed higher sensitivity to hydroxyurea, which is known to increase oxidative stress levels in yeast, leading us to propose that yeast strains defective for these proteins are subject to higher oxidative stress levels than mutants defective for COX assembly factors involved in other assembly pathways. The results of this study represent a major step forward in the phenotypic differentiation of COX deficiencies that arise from the loss of different assembly factors and may be relevant for future studies of human neurodegenerative disorders resulting from faulty COX assembly.