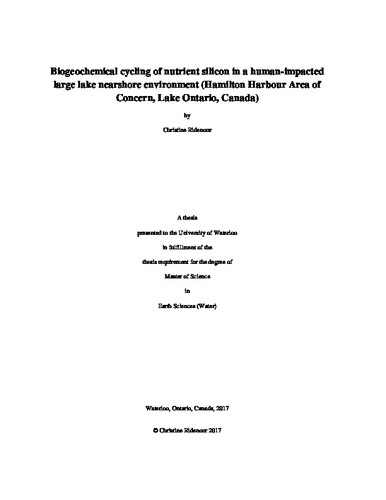 The biogeochemical cycling of nutrient silicon (Si) through rivers, wetlands, lakes, and artificial reservoirs regulates the magnitude and bioavailability of Si delivered downstream and to the ocean (Frings et al. 2014; Maavara et al. 2014; Laruelle et al. 2009; Struyf & Conley 2012). Lakes are areas of Si retention along the land to ocean continuum due to uptake of dissolved Si (DSi) by silicon-requiring phytoplankton, such as diatoms, and burial of biogenic Si (BSi) as siliceous frustules in sediments (Frings et al. 2014). The nearshore zones of lakes and the coastal ocean directly receive nutrient inputs from the watershed, which may lead to eutrophication (Haffner et al. 1983; Jickells 1998; Mackenzie et al. 2000; Strayer & Findlay 2010). Enrichment with the nutrients phosphorus (P) and nitrogen (N) can enhance DSi uptake, which can ultimately lead to Si depletion and limitation of siliceous phytoplankton growth in the water column (Schelske & Stoermer 1971; Schelske & Stoermer 1972). Sediments can play an important role in water column nutrient dynamics through acting as a source or a sink of Si and P (Orihel et al. 2017; Nriagu 1978; Schelske 1985). Interactions between dissolved Si and P in pore waters and oxygenation at the sediment-water interface may influence the release of Si and P from sediments (Tuominen et al. 1998; Hartikainen et al. 1996; Tallberg & Koski-Vahala 2001; Koski-Vähälä et al. 2001; Tallberg et al. 2008; Siipola et al. 2016; Lehtimäki et al. 2016). Relatively little is known about Si cycling in the sediments and water column of nearshore zones of large lakes, such as the Laurentian Great Lakes, and it’s response to eutrophication. This thesis examined the biogeochemical cycling of reactive Si in the Hamilton Harbour Area of Concern, a highly eutrophic and human impacted nearshore area of Lake Ontario. The Hamilton Harbour Area of Concern includes Cootes’ Paradise marsh and Hamilton Harbour. The mechanisms influencing internal loading of Si and P were investigated in sediments collected from Cootes’ Paradise marsh (Chapter 2). Sediment core flow through systems were used to test the effects of oxic and anoxic conditions at the sediment-water interface, and the relative concentrations of Si and P in pore waters on the internal loading of Si and P. Both P and Si appeared to be retained and released by iron(Fe)(III) oxide minerals through adsorption to or coprecipitation with Fe(III) oxides under oxic conditions, and reductive dissolution of Fe(III) oxides and release of sorbed P and Si under anoxic conditions. Compared to oxic conditions, anoxic release of P increased by 8 times while anoxic release of Si increased by only 1.4 times. Thus, sorption to and release from Fe(III) oxides was proportionally a more important mechanism of internal loading for P than Si, leading to greater P retention under oxic conditions and release under anoxic conditions relative to Si. In contrast, dissolution of biogenic Si was likely the dominant source of Si release under oxic and anoxic conditions, however anoxic conditions increased Si release by approximately 40%. The decoupling of Si and P cycles under oxic and anoxic conditions resulted in the Si:P ratio of anoxic release being low (mean Si:P < 16) relative to the Si:P ratio of oxic release (mean Si:P >23), which may potentially contribute to Si limitation of siliceous phytoplankton growth in the water column. A reactive Si mass balance model was constructed for Hamilton Harbour to determine if Hamilton Harbour is a net source or sink of reactive Si, and if Si is stoichiometrically limiting to diatom growth with respect to P. This was achieved through quantification of reactive Si inputs, outputs, and transformations within the water column and sediments through field sampling and experimental work, followed by mass balance modelling. Si limitation was determined by calculation of Si:P ratios in the water column of Hamilton Harbour throughout the growing season of 2016, and stoichiometric limitation was defined as a Si:P ratio less than 16:1 (Redfield 1958; Brzezinski 1985). Hamilton Harbour was found to be a net sink of reactive Si, retaining approximately 16% of total reactive Si inputs. Internal loading, water exchange between Hamilton Harbour and Lake Ontario, and discharge from wastewater treatment plants were the largest fluxes of Si to the Hamilton Harbour water column. Si was stoichiometrically and likely physiologically limiting to siliceous phytoplankton growth between May and November 2016, which is in contrast to the assumption of P limitation of phytoplankton growth and may be contributing to the seasonally recurring harmful algal blooms in Hamilton Harbour (Hiriart-Baer et al. 2009). This research demonstrates that freshwater nearshore zones, such as coastal wetlands and embayment’s are important areas of nutrient cycling that can alter nutrient fluxes from the watershed to the open lake. Coastal wetland sediments may act as a source or sink of Si and P to the water column depending on redox conditions at the sediment-water interface. Different mechanisms of internal loading decouples the Si and P cycles in sediments. The nearshore zones of large lakes can reduce Si export offshore and downstream through nutrient retention. Anthropogenic sources of Si such as wastewater treatment plant effluent can be a larger source of Si than tributaries and groundwater, and as such humans are directly affecting the biogeochemical cycling of Si in nearshore zones. Cultural eutrophication in nearshore zones can lead to Si limitation, which may have critical implications for ecosystem functioning and repercussions for nutrient cycles offshore and downstream. This knowledge enhances our understanding of the effects of human activities and cultural eutrophication on biogeochemical Si cycling along the land to ocean continuum. This knowledge may better inform ecosystem modelling and the impacts that climate change may have on Si biogeochemistry, such as spreading hypoxic zones (Rabalais et al. 2010). Through furthering our understanding of factors influencing phytoplankton dynamics, this knowledge may be beneficial to remediation efforts and the protection of nearshore zones in freshwater lakes.