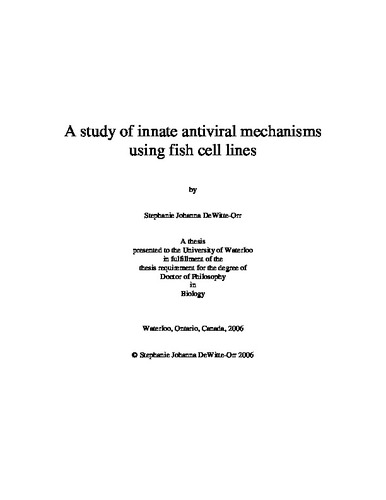 Understanding basic antiviral mechanisms in vertebrates is essential for developing methods to enhance antiviral responses and promote human and animal health. In fish these antiviral mechanisms are poorly understood, but are important to understand because of the devastating impact of viral diseases on aquaculture. Therefore, the antiviral responses of a rainbow trout macrophage-like cell line, RTS11, and two non-immune cell lines, the rainbow trout fibroblast RTG-2 and Chinook salmon embryo CHSE-214 were studied. Three antiviral responses were first characterized using the viral mimic, synthetic double-stranded RNA (poly IC), and then their induction was investigated using Chum salmon reovirus (CSV). The responses were: 1) apoptosis, which is programmed cell death and a primitive antiviral defense; 2) homotypic aggregation (HA), which is clustering of like immune cells; and 3) expression of Mxs, which are antiviral proteins belonging to GTPase super-family. Some of these antiviral mechanisms were investigated using a novel continuous cell line, PBLE, developed from a peripheral blood leukocyte preparation of the American eel, <em>Anguilla rostrata</em>. <br> <br> RTS11 was exceptionally susceptible to apoptosis. The cells died at lower concentrations of poly IC and other agents, including the translation inhibitor, cycloheximide (CHX), and fungal metabolite, gliotoxin. Death was predominantly by apoptosis, as judged by DNA ladders, nuclear fragmentation, and protection by caspase inhibitors. By contrast, the other two cell lines died most commonly by necrosis, when death did occur. Co-treating RTS11 with CHX greatly sensitized the cells to poly IC. Based on the protection afforded by inhibitors of dsRNA-dependent protein kinase (PKR), RTS11 apoptosis induced by poly IC with CHX co-treatment but not gliotoxin was mediated by PKR. As macrophages are likely among the first cells to contact viruses during an infection in vivo and are mobile, the sensitivity of RTS11 to dsRNA killing could reflect a protective mechanism by which virus spread is limited by the early death of these first responders. <br><br> HA of RTS11 was induced by poly IC. HA required divalent cations and was blocked by CHX and by PKR inhibitors. This suggested that HA induction was PKR-mediated and involved the synthesis of new cell surface molecule(s), possibly galectins. As an antiviral mechanism, HA induction by dsRNA could be interpreted as an initial protective response, allowing cell localization at the site of infection, but once translation becomes inhibited, apoptosis ensues. <br><br> Mx was induced by poly IC in RTS11 and RTG-2 as judged by RT-PCR. Western blotting revealed constitutive Mx expression more consistantly in RTS11, but induction by poly IC in both cell lines. Medium conditioned by cells previously exposed to poly IC and assumed to contain interferon also induced Mx transcripts in RTS11 but not RTG-2. In RTS11, poly IC activated PKR activity, and PKR inhibitors blocked <em>Mx</em> induction, which is the first demonstration of PKR mediating Mx expression. <br><br> The dsRNA virus, CSV, also induced apoptosis, HA, and Mx expression, but in some cases contrasting with poly IC experiments. CSV induced apoptosis in RTG-2 and CHSE-214 but not in RTS11, and HA induction by CSV in RTS11 was not dependent on PKR. Mx induction was sustained in RTG-2 and transitory in RTS11; however, both cell lines supported CSV replication. <br><br> The novel cell line, PBLE, was also characterized in this study. PBLE was derived from an adherent culture of peripheral blood leukocytes from the American eel, <em>Anguilla rostrata</em>. PBLE were found to grow over a wide range of temperatures and fetal bovine serum (FBS) concentrations. This cell line was able to undergo apoptosis in response to gliotoxin. PBLE was also susceptible to a number of viruses, including CSV; however, CSV infection did not lead to apoptosis. <br><br> This study suggests that antiviral responses are likely numerous and overlapping and depend on cell type and virus. Understanding them should lead to novel methods for protecting fish from viral diseases. More specifically, using cell lines such as PBLE may aid in the understanding of species specific and perhaps even cell type specific antiviral mechanisms.