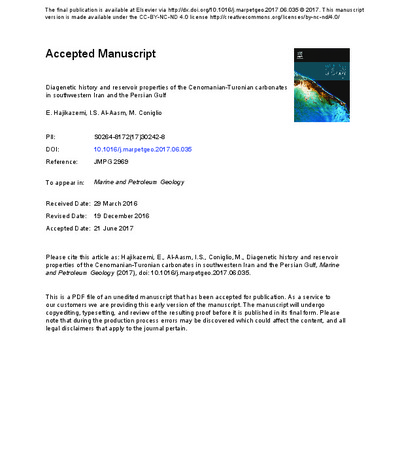 Shallow-marine carbonates of the mid-Cretaceous Sarvak Formation are important reservoir rocks in southern Iran and the Persian Gulf region. These carbonates were deposited on the margin of the Arabian Plate and rest on the Kazhdumi Formation, which is one of the major hydrocarbon source rocks in the region. The top of the Sarvak Formation coincides with the regional Turonian unconformity. Most of the observed diagenetic features are genetically related to meteoric waters entering the Sarvak Formation during Cenomanian-Turonian and mid-Turonian uplift and the subsequent paleoexposure. Integration of field and petrographic studies and isotope geochemistry reveals the history of a variety of diagenetic processes, which include dissolution and development of secondary porosity which enhance reservoir properties of the Upper Sarvak carbonates. Various types of calcite cements were identified as the main cause for porosity loss in these carbonates. Their diagenetic environment is discussed using the geochemical data acquired as part of the present study. The δ18O and δ13C values (−12.3 to −0.6‰ and −5.8–3.6‰ VPDB, respectively) of the cements indicate precipitation from marine, meteoric and/or mixed meteoric-marine fluids. Some drusy calcite cements exhibit δ18O and δ13C values (−5.1 and 0.8‰ VPDB, respectively) and higher 87Sr/86Sr ratios, comparing to mid-Cretaceous carbonates, (i.e., 0.70747), which may indicate precipitation from meteoric waters. Lower δ18O and δ13C values (e.g. −5.1, 0.8‰ VPDB) combined with higher 87Sr/86Sr ratios (e.g., 0.70747) of some drusy calcite could confirm their precipitation from meteoric waters. Lower δ18O values of some blocky calcite cements (e.g., −12.3‰ VPDB) and matrix-replacive compression-related dolomites (i.e., −7.3 to −3.4‰ VPDB) suggest their precipitation at rising temperatures during burial. The range of δ13C values (−5.8–3.6‰ VPDB) suggests that the main source of carbon in the calcite cements was primarily marine mixed with isotopically more negative carbon from atmospheric/soil-derived CO2.